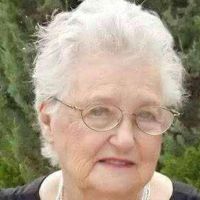 Dolores Isabelle Anderson, a long-time resident of Sheridan, passed away Sunday the 28th of May at Sheridan Manor.Born July 6, 1928, in St. Paul, MN, Dolores graduated with honors from high school in 1945.  She continued her education in North Dakota by pursuing business college, graduating in 1947.  While attending school and living in a lady’s boarding house, Dolores met the owner and operator’s son, Purdon “Pete” Anderson, who was home on leave from the U.S. Navy. After World War II, Purdon and Dolores were married in Our Savior’s Lutheran Church in Colfax, ND on February 8, 1948.  Purdon and Dolores had six children: Michael Phillip, Kathleen Joyce, Steven Thomas, SuzAnne June, Timothy James, and Jonathan Peter. Dolores had a successful career as the Executive Secretary for Armour and Company.  In 1955, the family moved to Missoula, MT to allow Purdon to continue his career as a pipefitter/plumber.  Dolores was able to remain home with their children. In her younger years, Dolores enjoyed dancing and singing, as well as playing the piano for her children. In her later years, she enjoyed arts and crafts, often bringing home medals and ribbons. She also enjoyed playing bingo, sharing in good times with friends and family.  In 2005, Dolores moved to Sheridan, WY to be closer to her eldest daughter, Kathy.  A short time later, she moved to Sheridan Manor where she lived for over 10 years.  Dolores was an active member in the Sheridan Manor community, where she was well loved. She also enjoyed socializing and caring for her baby dolls.  Dolores was kind, funny, and had a wonderful smile that could light up a room.She is preceded in death by Purdon, and their youngest son, Jonathan.   She is survived by her children, her many grandchildren, and several great-grandchildren.We will always remember the joys and blessings she brought into our lives.Services will be held at 2:00 pm on Friday, June 2, 2017, at Kane Funeral Home with Father Robert Rodgers officiating.Kane Funeral Home has been entrusted with arrangements.