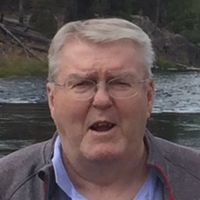 Dennis B. Perryman, 77, of Sheridan Wyoming passed away on April 24, 2018 at his residence.  Dennis was born on August 3, 1940 to Homer and Phyllis Perryman in Laramie Wyoming.  Dennis was educated at Mesa College and University of Wyoming through his Masters degree. Starting in 1962, he taught and coached basketball at Evanston High School where he met his future wife Cherie and married her on July 25, 1964.In 1967, his love for Junior College athletics began at Dawson Community College in Glendive, MT and he spent the next 13 years leading the Buccaneer’s basketball program to new heights.  During his tenure at Dawson he had the opportunity to serve as an Olympic basketball coach for the Olympic trials in Colorado Springs for two summers.  After a short stint at the four year level, Dennis jumped back to the JUCO ranks at South Plains College In Levelland Texas to coach basketball for the next 5 years where he eclipsed the 400 total win mark.  After spending one season in Istanbul Turkey coaching professionally, Dennis landed his last career job leading the athletic programs as Athletic Director at Garden City Community College in Garden City, Kansas.During his 19 years as athletic director at GCCC, Dennis was instrumental in producing one of the most successful runs in Broncbuster history and bringing the program back to prominence. The football program won 75 percent of its games, taking home six conference titles and landing in 13 bowl games. The wrestling team captured eight straight zone titles and three national championships. The baseball program hoisted seven regional-championship trophies and played in the 1999 JUCO World Series, and the women\'s basketball program qualified for nationals twice, finishing fourth in 2003. He also produced 150 NJCAA Academic All-Americans.  Dennis was instrumental in the expansion of the campus athletics complex, and soon after his retirement in 2005, the physical education building was named the Dennis B. Perryman Athletic Complex.His life was devoted to student athletes at the Junior College level for more than 36 years.  His love to watch student-athletes develop and learn never died.  He reorganized the board of volunteers (BAA) at GCCC to support the student-athlete first and foremost.  He enjoyed being involved with student athletes, coaches, volunteers and administrators.  He was actively involved in many different areas of junior college athletics, serving as Region IX and Region VI Director for over a decade and serving as the National Director for Wrestling for the NJCAA.  In 1999, Dennis was elected into the NJCAA Basketball Hall of Fame to validate his lifetime of service to the NJCAA level.Dennis loved family, extended family like the basketball coaching world, University of Wyoming Cowboys, fly fishing the great outdoors of Wyoming, the Boston Celtics, the New York Yankees, and following whoever’s kid was on TV.  Dennis was known as a generous man, giving of his time, his possessions, and his home.  Dennis was preceded in death by his daughter Wendy C. Perryman and is survived by his wife Cherie, two children, Nikki Perryman and Brandy Perryman and his wife Amanda, and two grandchildren Gavin Perryman and Luke Perryman and extended family throughout Wyoming and neighboring states.