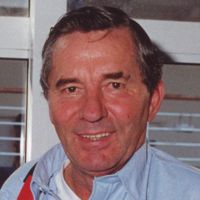 Dennis Lee HansenAugust 11, 1944 – August 12, 2013Dennis was born August 11, 1944 in Pierre, South Dakota to Marinus and Alma Hansen. He passed away peacefully August 13 at his home in Sheridan, Wyoming.Dennis graduated from Harold High School and soon after joined the Navy and was stationed in many countries around the world. In 1976, he married Beverly and they lived in Wyoming until 1990 when they moved to Oregon where they resided together until her passing in 2007. Dennis made his way back to Wyoming in 2010 and enjoyed being back in the mountains and closer to his siblings and youngest grandchildren. He quickly became a Bronc fan and looked forward to watching his grand kids play football, basketball and soccer and listened to every away game on the radio.Dennis was employed as a heavy equipment operator most of his life and missed the feeling of a \"hard day\'s work\" after a stroke forced him to an early retirement. He loved football and was never ashamed of being an Oakland Raiders fan! Dennis could be found watching rerun sit-coms, western\'s and old Johnny Carson videos or listening to classic country. After moving to Sheridan he revived an old passion: singing. He loved to sing \"Give My Love to Rose\" on Sunday\'s at the Eagles Club, where he was a member for 25 years. His older grandchildren remember his delicious pots of chili and potato soup and wish they\'d gotten his recipe.Dennis was preceded in death by his parents, wife Beverly, brother Nels, son Lee, niece Cheryl and nephew Lloyd. He is survived by: Son\'s Scott & Robin Buckles of Maui, Hawaii and Mark Buckles of Reedsport, Oregon. Daughter\'s Wendy Ellsworth of Vallejo, California; Tammy Gray of Reedsport, Oregon; Lisa Davis of Virginia Beach, Virginia and Jeannie & Don Julian of Sheridan, WY. 12 Grandchildren: Allison & Jessica Gray; Eli & Libby Ellsworth; Bryant & Brett Buckles; Jeremy, Ashley & Brenan Davis; and Katelynn, Tyler & Emily Julian. 2 Great Grandchildren: Lilly Dugen and Linus Estenson. Brother Lyle & Eileen Hansen of Rawlins and Sisters are Arlene & Jake Vilhauer of Highmore, South Dakota and Lavonne & Paul Bouffard of Jackson, California and many much loved nieces and nephews.Family will greet friends at 4:00 p.m. on Saturday, August 17, 2013 at Kane Funeral Home with Father Louis Shea officiating.Kane Funeral Home has been entrusted with arrangements.