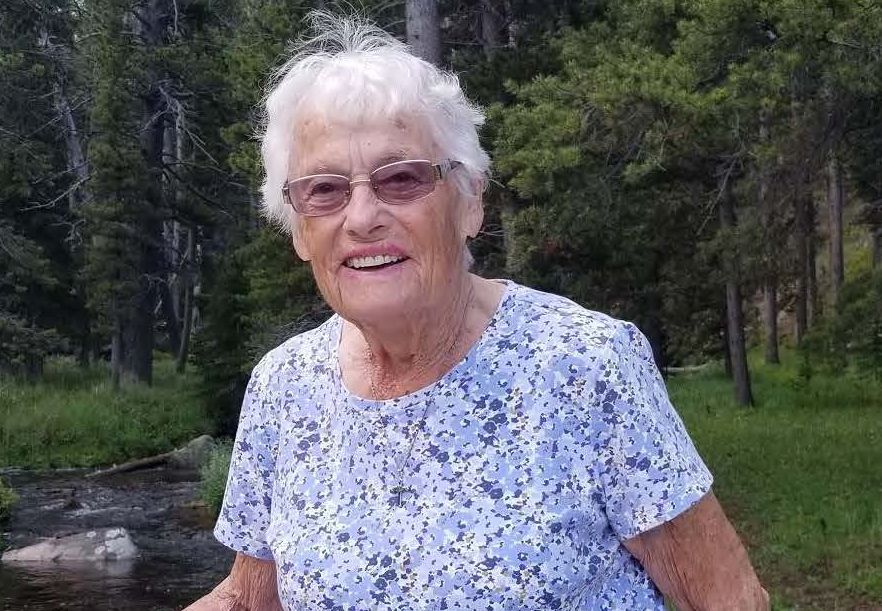 Long-time Sheridan resident, Docia Schuman, age 89, passed away on Friday, June 11, in Buffalo, Wyoming with her husband Don and her children nearby. Services will be held at 2:00 on Wednesday, June 23, at Kane funeral home in Sheridan with a graveside service for immediate family following.

Docia was born in Sheridan, Wyoming on February 23, 1932, to Granville and Alta Carroll. She was the ninth of their 14 children. She grew up in a very strong and loving family, and treasured her childhood memories. She rarely missed a Carroll family reunion, and was always in the midst of the laughter and fun.

Docia was raised in Sheridan and graduated from Sheridan High School. After attending one year at the University of Wyoming, she was married to Wallace Chesbro. Together they raised seven children, moving from Wyoming to Colorado, and then to Nebraska before returning to Wyoming. After they separated, Docia returned home to Sheridan where she later met and married Robert Hunter. They built a home outside of Sheridan where they loved to entertain friends and family until Bob’s death. At the time of her death, Docia was married to Don Schuman, where they shared a home in Sheridan. After she was diagnosed with dementia, Don was able to lovingly care for her and keep her in their home until shortly before her death.

Docia knew love. Her children, grandchildren, and great-grandchildren were the greatest beneficiaries of that incredible love. Even though her children were never perfect, she picked them up when they failed, and kept them humble when they succeeded. She was also known as a second mom to every friend her children brought home, and always had an extra peanut butter sandwich and a Scotcheroo to share.

Docia enjoyed the outdoors, cooking, gardening, and her being in beloved Sheridan mountains. She also loved to drive, even though she was not known for those skills, and the world was a safer place when someone could wrestle the car keys away from her.

Docia was preceded in death by her oldest son, Alan Chesbro, son-in-law Edward Katen, her parents, and 11 siblings. She is survived by her children Cam (Shirley) Chesbro, Vicki (Jay) Ward, Clark (Belinda) Chesbro, Peggy Katen, Brant (Carol) Chesbro, and Bryan Chesbro, 13 grandchildren, and 17 great-grandchildren. She is also survived by her brothers Neal and George Carroll, sister Ella Krull, and numerous nieces and nephews.

In lieu of flowers, Docia wished for any donations to be sent to Martin Luther Grammar School, 1300 W. 5th Street, Sheridan, WY 82801.