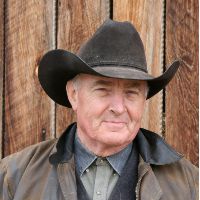 On a quiet Sunday morning, the Lord called Don Butler home. Don was born on September 28, 1946 in Billings Montana, and was a cowboy from day one. After proudly serving his country in Vietnam, he returned to work as a cowboy on several ranches in northern Wyoming and southern Montana. Don began leather tooling as a teenager, stamping belts for Ernst’s Saddlery in Sheridan. His interest in saddle making began one summer while working on a cow camp in the Big Horn Mountains. Don and Kitty opened the Custom Cowboy Shop in 1976 in Sheridan, Wyoming and a second store in Cody, Wyoming in 1990. Don perfected his craft and became well-known in his field, winning many awards and accolades including the Saddle Maker of the Year Award and the Governor’s Arts Award for the State of Wyoming in 2009. His passion for his craft extended into silverwork and artwork as well. He worked for the Wyoming Stock Grower’s Association as a brand inspector as well as a Sales Representative for several years. His passion for life and his work were unequaled. His greatest joy and pride were in his family, wife Kitty of almost 45 years, son Michael (Colleen), daughter Julie (Matt) and youngest son Steven. His two granddaughters, Molly and Nora were the apple of Papa’s eye. He is survived by one sister, Sheri Butler of Billings, Montana, and countless friends. This kind man had a big heart and was a mentor to many. He never met a stranger and will be greatly missed by all who knew him. He will be remembered always for his infectious laughter, the sparkle in his eye, his humbleness, generosity, honesty, unwavering integrity, sense of humor and willingness to help anyone in any situation. He was a true top hand and lived every day of his 67 years. A celebration of life will be held at 3pm on Thursday May 15, 2014, at the Sheridan County Fairgrounds Pavilion Building. In lieu of flowers, donations may be made to Westrust, P. O. Box 1645, Eastlake, CO 80614, the “Lunch Together” Soup Kitchen, c/o First Congregational Church, 100 W. Works, Sheridan, WY 82801 or the donor’s choice.Kane Funeral Home has been entrusted with arrangements.