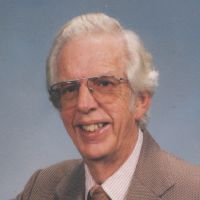 Donald E. Williams1928 - 2015 Donald E. Williams died peacefully on March 6, 2015 at the Sheridan Manor. Don was born on April 22, 1928 to Harry and Alice (Bremer) Williams at the family ranch on Piney Creek. Don spent his career working for local grocers; he worked for Safeway’s grocery until his retirement. He loved music and could play any instrument he picked up. Although he never learned how to read sheet music, he played beautifully by “ear”.  He most enjoyed playing the organ and did at times play for church services at a local Christian church.  He was also an avid gardener and enjoyed having flowers and plants both inside and outside his home. Don was preceded in death by his father and mother; brothers James, Ernest, and Richard; sisters Mildred “Betty”, Helen, two unnamed twins who died at birth, and Lois (Baker Rogers). He is survived by two sisters; Norma Grimm of Chicago, Illinois area and Emma Jane (Ivol) Martin of Casper, Wyoming.  He was also preceded in death by two nieces and is survived by 13 nieces and nephews and numerous great nieces and great nephews. Cremation has already taken place. His ashes will be placed in the Williams family plot on Sunday, March 15, 2015 at 2:00 p.m. at the Sheridan Municipal Cemetery.  A memorial reception will immediately follow at Kane Funeral Home Reception Hall.Kane Funeral Home has been entrusted with arrangements.