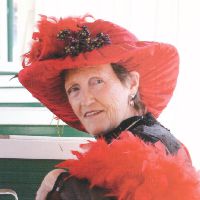 Donna Lee Study, 78, of Sheridan, passed away at Sheridan Memorial Hospital on Sunday, May 3, 2015.Donna was born on July 11, 1936, to John and Dorothy (Robb) Lynde in Sheridan, WY. Over the years Donna was a homemaker, cook, waitress and worked in the healthcare field. She enjoyed quilting, gardening, traveling, geneology, auction and yard sales, crocheting, and especially the Red Hat Society in which she was very active. She loved spending time with her grandchildren and her great grandchildren.Donna was a member of the Le Rouge Chapeaux Red Hat Society and The Latter Day Saints.Donna was preceded in death by her parents, two sisters; Nancy K. Williams, Betty Lou Samson, and her Aunt Bonnie Marquiss. She is survived by her children; Carmen (Rick) Turnbough of Broadus, MT, Donald (Becky) Chapman of Kaycee, WY, Stephen (Kristy) Chapman of Buffalo, WY, D\'Ann Wright of Sheridan, WY, nine grandchildren and eighteen great grandchildren.A Memorial Service for Donna will be held at 10:00 on Friday, May 8, 2015, at Kane Funeral Home with Reverend Kevin Jones officiating. A reception will be held after the service in the Kane Reception Hall.Memorials to honor Donna can be made to the Sheridan Memorial Foundation for the ICU Project, Box 391, Sheridan, WY 82801, or online at sheridanhospital.org.Kane Funeral Home has been entrusted with arrangements.