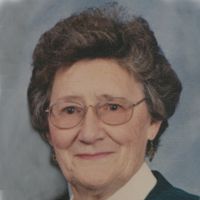 Donna Joy Teini, 86, of Sheridan, passed away at the Westview Health Care Center on Sunday, November 30, 2014. She was born August 13, 1928, to Leslie and Dorothy (Hiser) Sharp in Sheridan, WY.Donna graduated from Carroll College, Division of Nursing in 1950. She later worked for the Red Lodge Community Hospital for twenty three years. She had many fond memories of her coworkers and friends in Red Lodge and the friends she met in Sheridan.Donna married John Teini on December 16, 1950, and soon moved to the Red Lodge family farm where they raised their family and lived until retiring to Sheridan, WY in 1999.Donna was preceded in death by her husband, John W. Teini, and her parents. She is survived by brothers, Leslie “Bud” Sharp of Sheridan, WY, Roy Sharp of Sheridan, WY, sisters, Priscilla Hill of Ponca City, OK, and Minnie Burton of Sheridan, WY, her sons, John Dallas (Cecelia) of Roundup, MT, Hugh (Sheryl) of Billings, MT, Wayne (Marlene) of Sheridan, WY, and Tom (Gina) of Red Lodge, MT. She has eight grandchildren, John (Elizabeth) Teini, Joseph (Caitlin) Teini, Ryan (Mindy) Teini, Sean (Molly) Teini, Chris Teini, Theresa Teini, Derek (Stephannie) Teini, and Paul (Ellen) Teini, five great granddaughters and one great grandson.Upon her request, the family will be having a graveside service sometime in the Spring in Red Lodge. In lieu of flowers memorials to honor Donna can be made to a charity of your choice.Kane Funeral Home has been entrusted with arrangements.

Date:
Start Time:
Upon her request, the family will be having a graveside service sometime in the Spring in Red Lodge.
Location:
Tribute VideoService VideoService Brochure