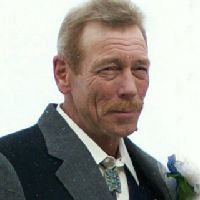 Donald “Donnie” Ray Townsend, 55, of Dayton, passed away on Monday, November 13, 2017, at his residence. He was born in Sheridan, WY on November 3, 1962, to parents Donald Clayton and Marilyn Jo (Wondra) Townsend. He graduated from  Sheridan High School in 1981.                                   Donnie enjoyed bull riding, snowmobiling, motocross, hunting, playing pool and horseshoes. He was a past member of the 7th Calvary Drum and Bugle Corp.Donnie was a welder fabricator, all around mechanic,a hard worker. He was dedicated to his job, friends, and family.  He would do anything for anyone at anytime.  Donnie was preceded in death by his grandparents, Cyrus and Auline Townsend, George and Frieda Wondra and his father, Donald C. Townsend. He is survived by his wife, Denise L. (Lewallen) Townsend of Dayton, son, Tyrell Townsend of Wellington, CO, four step children, mother, Marilyn (Dutch) Grace of Sheridan, brothers, Greg (Holly) Townsend of Sheridan, Brad Townsend of Sheridan, two grandsons and three nieces.An informal gathering and snacks will be held at 6:00 pm on Friday, November 17, 2017, at the Mountain Inn Bar in Dayton, WY, to share stories and fellowship.A Celebration of Life will be held at 11:00 am on Saturday, November 18, 2017, at Kane Funeral Home with Reverend Kevin Jones officiating. A reception will follow at the Rainbow Bar.Memorials to honor Donnie can be made to the Donnie R. Townsend Memorial Fund, Attn:Jennifer or Sherrie, First Interstate Bank, 4 S. Main St., Sheridan, WY 82801 to help with funeral expenses.Kane Funeral Home has been entrusted with arrangements.