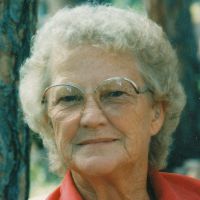 View Service Folder | Click for Video Tribute Doris Scrutchfield, 96, of Sheridan, passed away on Friday, May 9, 2014 at the Memorial Hospital of Sheridan surrounded by her family.Doris was born on March 22, 1918 in a sod house near Chadron, NE to parents Harlow and Esther (Rimmer) Taylor. She married Bud Higgins in Billings, MT on August 30, 1938. He passed away on August 10, 1968. She later married LeRoy Scrutchfield on April 26, 1971.Doris is survived by her children; Doran (Sharon) Higgins of Hammond, MT, Sandra Music (Roger Crumley) of Sheridan, WY, David (Pauline) Scrutchfield of Sheridan, WY, son in law, Martin Schuldt, of Sheridan, WY, numerous grandchildren, great grandchildren and great great grandchildren. She was preceded in death by numerous family members, most recently daughter, Bonnie Schuldt.A Viewing will be held Thursday, May 15, 2014 from 6 – 8 p.m. at Kane Funeral Home. Funeral Services will be held at 10:00 on Friday, May 16, 2014, at the Kane Funeral Home, with Pastor Doug Goodwin officiating.Interment will follow at 3:00 at the Valley View Cemetery in Broadus, MT.Kane Funeral Home has been entrusted with arrangements.