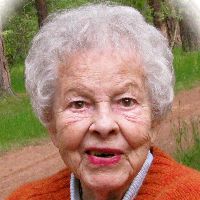 A granddaughter of A.E. and Emma Church who came to Sheridan, Wyoming, in the early 1890’s, her parents, Ralph and Josephine Church, moved from Gillette, Wyoming, to Los Angeles, California, in 1921 and there Dorothie M. Church was born, February 18, 1923. She peacefully passed away March 10, 2017.Married to Stanley Wenckus in 1945, a year later a son, Jeffrey, was born. The family moved to Gillette, Wyoming, in 1948 where a second son, Theodore, was born in 1950. Shortly thereafter, they moved to Sheridan County in the Story area.Before her marriage, Dorothie was coached to become a professional concert soprano soloist and after moving to Wyoming, became active in various church choirs. While in Buffalo, she became a member of the local Music Club and was elected State President, 1970-71 term. She represented Wyoming at the National Board meeting of the Federated Music Clubs of America in Detroit, Michigan.For many years, Dorothie contributed to the Story Community Church with her singing and participation. She belonged to a Bible study group, which had a large influence in her Christian life.Those closest to Dorothie who will mourn her passing are sons Jeff and Ted; Ted’s wife Carina, all of Story; grandson Kolten Wenckus and wife Cassie of Billings, Montana; and those acquaintances who recognize her love of God and people.Services will be held at the Story Community Church on March 17, 2017, at 11:00, Pastor John Constantine officiating and Mary Jo Johnson providing special hymns.Kane Funeral Home is in charge of arrangements; interment will be in the Elk’s section of Sheridan County Cemetery, next to her husband Stanley, who passed away in 1982.The family requests in lieu of flowers, contributions be given in her name to Story Community Church, 4 Ponderosa Drive, P.O. Box 415, Story, Wyoming, 82842.Kane Funeral Home has been entrusted with arrangements.

Date:
Start Time:
Services will be held at the Story Community Church on March 17, 2017, at 11:00
Location:
Service VideoService Brochure