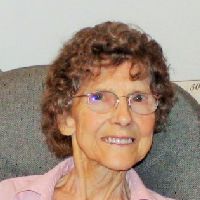 Dorothy Jean Schlicting, age 78, passed away at her home in Banner, Wyoming on Thursday, July 10, 2014. She was the fourth of five children born to Alfred Harold and Gertrude Henrietta Swanson on October 29, 1935 in Vancouver, Washington.It was in Finley, California on November 20, 1953 that she married Dana Russell Schlicting. They made their home in Blocksburg, California where they raised their two sons, Steve and Bruce. In 1997 they moved to Sheridan, Wyoming to be near their children and grandchildren. Dorothy and Dana celebrated their 60th wedding anniversary at their home last November.Dorothy was primarily a homemaker, but did work outside the home as a teacher’s aide for a number of years. She was always a positive influence for the kids and staff at the school. Many of “her kids” benefitted from her passion of believing that every child should know how to read and enjoy reading. Everywhere she went, Dorothy could light up the room with her enthusiasm for life. After retirement she enjoyed travelling and her hobby of Ham radio, which she shared with her husband. Every morning without fail, they would check in with the Ham friends on the radio.Dorothy will always be remembered for her heart of gold, the twinkle in her eyes and the love in her hand written messages on greeting cards that arrived without fail for every occasion. No matter the state of her health, Dorothy’s smile never faded. She showed gratitude every moment and lived each day to the fullest.Dorothy is survived by her husband, Dana, her sons; Steve (Carol) Schlicting, Bruce (Nancy) Schlicting, her grandchildren; Ben(Teresa) Schlicting, Ryan(Lindsey) Schlicting, Sarah(Kyle) Hoffdahl, Jessica Schlicting, Aaron(Tiffany) Schlicting and her great-grandchildren; Fern Hoffdahl, Fawn Hoffdahl, Jake Carlson, MacKenzie Carlson, Jeremy Carlson, Elizabeth Schlicting, Avery Schlicting, Taylor Schlicting and Envie Schlicting. She was preceded in death by her parents and her siblings.There will be \"A Celebration Of Life\" for Dorothy Schlicting at the Holiday Inn in Sheridan, Wyoming on Saturday, July 26, 2014 at 11:30 am.In lieu of flowers, donations may be made in Dorothy’s memory to the Sheridan Dog and Cat Shelter at 84 East Ridge Road, Sheridan, WY 82801.Kane Funeral Home has been entrusted with arrangements.