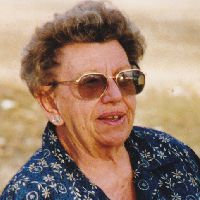 Dorothy Lubs McIntyre of Ranchester went home to meet her Lord on October 17th, 2014 at the Westview Health Care Center.She was born November 17th, 1925 in LaPorte, Indiana to Harvey and Edith (Brown) Lubs. They moved to the Black Hills of SD when she was two. She witnessed many wonders in her life including watching the blasting of Mount Rushmore. She married Robert McIntyre on May 26, 1946 in Gillette, WY where their first son Jerry was born. They relocated to Sheridan around 1950 where their other two sons Randy and Lynn were born. She loved spending time with her family fishing, hunting and being in the Big Horn Mountains. She had many jobs in her life, but working at the Wyoming Girls Schools and eventually being a campground host were two of her favorites. She taught many people to crochet and could crochet doilies while sleeping in her rocking chair.She is proceeded in death by her parents, her husband, Robert and son Jerry. She is survived by her daughter in law, Nancy McIntyre; son Randy and wife Sandy McIntyre and son Lynn McIntyre; 7 grandchildren and 10 great grandchildren.Memorials can be made to Camp Bethel Scholarships, PO Box 70, Dayton, WY 82836.A memorial service will be held at 3 pm Friday, October 24, 2014, at the Dayton Church.Kane Funeral Home has been entrusted with arrangements.