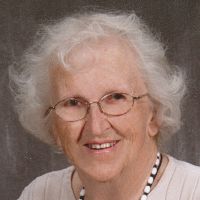 Dorothy Marie (Sieczkowski) Goodmay, 86, died Saturday, September 13th, following a 10 year battle with Alzheimers. She was born May 1, 1928 in Detroit, Michigan to Susie K. and Walter Harry Sieczkowski. The family moved to Monarch, Wyoming when Dorothy was a young child. In the seventh grade, Dorothy lost to an eighth grader and had to settle for the second place trophy in the Sheridan County spelling bee. She was a member of the Sheridan High School honor society where she graduated in 1946.While attending high school she met and later married Gordon Goodmay on October 5, 1947 at the Saint Thomas Catholic Church in Monarch. She started her working career as a bookkeeper for John P. Croft, CPA and retired from the same firm - now called Rucki Marshall Newbrough CPA - in 1996. Dorothy & Gordon celebrated their 50th wedding anniversary October 1997. Dorothy was a member of the Holy Name Catholic Church, American Legion and Big Horn Mountain Eagles. She enjoyed cooking, camping, dancing, gardening, reading and music.Dorothy was preceded in death by her parents Susie and Harry, a brother Leon, her husband Gordon and a grandchild Christopher Mathis. She is survived by her sister Rosemary Kostenbauer (Lynn) of Buffalo, her son Larry Goodmay of Sheridan and her daughter Gloria Mathis (Roy) of Wheatland; grandchildren Chad Mathis (Estelle) of Castle Rock Colorado, Vicki Keil (Mark) of Casper, Clint Mathis (Christa) of Strasburg Colorado, Corenna Goodmay of Newark Texas and Wade Goodmay of Benbrook Texas; eight great grandchildren.During the last few years of her life, Dorothy was cared for in her home by her son Larry and several terrific care givers: Teresa Peterson, Stephanie Grasky, Laura Niehay, Sheila Hayes and Carmen Mickelson.Memorials to honor Dorothy may be made to the Sheridan Senior Center, 211 Smith St., Sheridan, WY 82801.A Visitation at 6:00 p.m. with a Rosary at 7:00 will be held on Thursday, September 18, 2014, at Kane Funeral Home. Mass of the Christian Burial will be held at 10:00 a.m. on Friday, September 19, 2014, at Holy Name Catholic Church with Father Jim Heiser officiating. Interment will follow in the Elks Memorial Cemetery followed by a reception at the Big Horn Mountain Eagles #4169 at 1760 Commercial Lane, Sheridan, WY.Kane Funeral Home has been entrusted with arrangements.