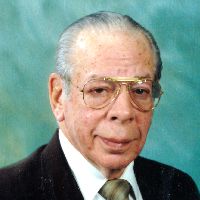 Longtime resident, Dr. Oscar Jimenez-Rojo died on July 28, 2015 at the age of 94.  He was born to Ceferino and Alicia Jimenez-Rojo on November 19, 1921 in Havana, Cuba.  After graduating with his MD from the University of Havana, he came to the United States in 1944 to complete his medical training at Edgewater Hospital in Chicago, Illinois.  Though he knew no English when he came to the US, he learned the language with the assistance of Mary Jane Wahl, a nurse at the hospital, whom he married in Homewood, Illinois on December 8, 1945.  He completed his residency in Obstetrics and Gynecology at Lewis Memorial Hospital, finishing at Mercy Hospital (Loyola University Clinics) in Chicago in December, 1948. He became a citizen of the United States that same year.Dr. Rojo fell in love with Sheridan when he got off the plane to interview for a position at the Schunk Clinic.  Because of World War II, several states had adopted laws forbidding the entrance of foreign graduates.  Luckily, his mentor was acquainted with a member of the Wyoming medical board, and he was allowed to take the state licensing examination. As a result, he has the distinction of being the first foreign graduate and specialist physician in the state of Wyoming.Dr. Rojo practiced at the Schunk Clinic from 1949 to 1955.  After serving in the United States Air Force, stationed in Shreveport, Louisiana and Orlando, Florida, he was discharged with the rank of Major in 1957.  Returning to Sheridan, he and Dr. Jake Batty became partners in the construction of an office building at 1260 West 5th Street, where they practiced until retirement in 1987. Dr. Rojo delivered 10,153 babies during his years of practice and performed approximately 3,000 major surgical procedures.  He was an exceptional physician and surgeon and was well respected throughout the state as an expert in his specialty.Dr. Rojo was instrumental in bringing many of his family members from Cuba to the United States to live in freedom after communism took hold in that country.  Those included his brother and family, his nephew and mother, and his own mother.Dr. Rojo was an avid hunter worldwide, including two safaris to Africa with Dr.Jake Batty to hunt big game. He hunted polar bear in Norway, caribou in Alaska, fowl in South Dakota, and many seasons in the Big Horn Mountains hunting deer, elk and antelope.  He enjoyed camping, fishing, horseback riding, bowling and world travel.Dr. Rojo was preceded in death by both parents, his brother Jose Luis Jimenez-Rojo, his sister Adelaida Carroll, and his first wife, Mary Jane.  He is survived by his children, Nancy Rojo Werner (Peter), of Clyde, NC, Helen Rojo Oswald (Donald), of Deland, FL,  David Rojo (Amy), of Sheridan, Maria Rojo Barbula (James), of Livingston, MT, Stuart Rojo McLin (Cathy) of Greenville, MD, his nephew Servio Carroll (Mary), of Sheridan, his niece Alicia Palacio (Joachin), of Miami, FL, stepson Mark Fleming (Chris), of Gillette and stepdaughter Mary Fleming Hanft  of Sheridan, as well as his grandchildren, Kirsten Engel, Shannon Sypert, Tanya Bass, Misty Miller, Jeff Miller, Chris Rojo, Jon Rojo, Danny Rojo, Ryan Barbula, Sean Barbula, Keaten Barbula, Wendy Gale, Kelly Buckingham, Kelly Richmond, Ian McLin, and nine great-grandchildren.  A visitation will be held at 6:00pm with a rosary at 7:00pm on Friday, August 14, 2015 at Kane Funeral Home.  Mass of the Christian Burial will be held at 10:00am on Saturday, August 15, 2015, at Holy Name Church with Fr. Jim Heiser officiating.  Interment with Military Honors will be in the Sheridan Elks Memorial Cemetery with a reception to follow at the church.  In lieu of flowers, the family asks that contributions be made to Holy Name School athletic program. Kane Funeral Home has been entrusted with arrangements.