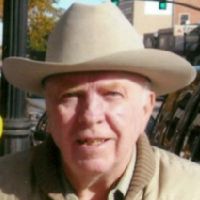 Duane Currie Donahue, 86, of Sheridan, passed away on Friday, January 2, 2015, at the Sheridan Manor. He was born on October 27, 1928, in Sheridan, WY to parentsHershall and Evelyn (Currie) Donahue.As a small child Duane attended schools in Sheridan, WY and Casper, WY. During the summer months he spent lots of time on his Uncle Jim Mattox\'s Ranch near Quitis and Broadus, MT. In his high school years, he learned to fly airplanes. He worked in the Big Horns for the Forestry Department – he loved the mountains.Upon his high school graduation in 1947, he ventured to Ft. Collins, CO and the Forestry Department at then Colorado A&M (now CSU). Also he was in ROTC.Duane met Peggy Poor in Ft. Collins, CO, they were married on September 16, 1950, in Ft. Collins. They lived there until his graduation from Colorado A&M. He then went into the Air Force. First being stationed at Victorville, CA, then Columbus, MS, Chandler, AZ and Las Vegas, NV. Duane flew planes in the Korean War in 1952 – 1953, flying F82 Sabre Jets in the 606 AC & W Squadron and the 334th Fighter Intercepter Squadron at Kimpo, Korea. Upon returning from overseas, he was stationed at Las Vegas, NV (Nellis Air Force Base) flying and doing accident investigations until his discharge in 1957.While in Las Vegas, he and Peggy had a son Michael J. who was born in Sheridan, WY in 1954, while Duane was on leave. After discharge from the Air Force they returned to Ft. Collins (now CSU) to study and obtain a Teaching Degree.They then moved to Sheridan, where Duane taught Math at Sheridan High School. He was respected by many students and local residents and still is this day. Always - “Mr. Donahue”. He retired in 1988.Duane and Peggy square danced for 43 years, traveling to many states and making wonderful friends. Duane cued and taught dancers to do the Round Dances (Circle dances connected to Square Dancing). He loved good western music!Duane had many RV Trailers-campers and loved to go to the Big Horns. They made many trips to Washington State to see the son, his wife Amy and his two granddaughters, Jennifer and Caitlin.Duane was proud of his Air Force career of eight years and was knowledgeable of many models of planes.Duane was a red headed Irishman with a quiet temper. He loved snow and the mountains, his son and wife, Amy, and his “2 gran girls,” Jen and Caitlin. He had and still has many, many good friends. He could talk to anyone. His later years were hard on him as he could not get around because of ill health.Duane was preceded in death by his parents, Hershall and Evelyn (Currie) Donahue, brother, Tom Donahue, aunts, uncles and cousins (Townsend\'s). He is survived by his wife, Peggy, son, Michael J. (Amy) Donahue, granddaughters, Jennifer and Caitlin, sister in law, Nancy Donahue, brother, Byran H. Donahue and wife, Verla of MT, nephews, Sam Donahue and family, Steve (Kathy) Donahue, John Donahue, Jim (Jen) Donahue and family, Suzanne (Bill) Moody and their boys, Willy and Tommy, cousin, Jack Donahue and Townsend Family.Private Family Services will be held at a later date.Kane Funeral Home has been entrusted with arrangements.