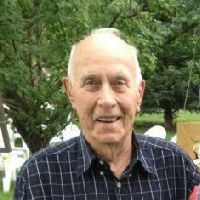 Duane was born January 14, 1926 in Lyons County, Nebraska.  He was the oldest son of Howard Andrew Harvey and Vera Frances Bovee.  The family moved to Wyoming when he was a toddler living in Greybull, Midwest and eventually Casper where he attended Natrona County High School.  The family moved to San Diego, California while he was in high school and he graduated in San Diego in 1944.He was a skilled and artful craftsman, designer, and engineer.  As a young man he loved to build and fly balsa wood airplanes and designed and built a scale replica of a German war plane that won a state-wide competition and was selected to hang in Washington, DC at war meetings.He worked for Sweetheart Bread in the Big Horn Basin as a young man and meta gruff grocer by the name of C. Golden Welch in Cowley.  Though slightly intimidated by him, he wasted no time courting his daughter Ilene and getting the approval of Golden’s wife Ora and the two married in 1948.  They celebrated their 67th wedding anniversary this past July 18th.He was an avid hunter and fisherman, spending much of his early marriage fishing with Mom in and around Shell Canyon.  They lived in Greybull and Thermopolis, then Casper before settling in the Sheridan area, first in Big Horn.He loved working with wood and built and remodeled many homes in and around Sheridan and after retiring from it full-time took on many smaller jobs in the Big Horn Basin.  There was never a challenge that couldn’t be solved, or a task that couldn’t be done economically and he was always the man for the job.He loved the Savior Jesus Christ and was baptized a member of The Church of Jesus Christ of Latter-day Saints.  His first experience in the Cowley Chapel made him exclaim, “It felt like I was home.”He loved his family, sharing his love freely, and his gentle and kind attributes with all.  He believed strongly that a man’s word was his bond and lived his life as an example of that.  He was a man of strong integrity and commitment.  During retirement he and Mom loved the years they spent in Hurricane, Utah and the friendships and golf buddies they made among the winter residents there.  They have cherished the dear friendships of many others they have made here in Sheridan, in Lovell, and in Cowley.He was preceded in death by his parents, younger siblings Ronald Harvey and Frances Phipps, two sons-in-law Ronald Petty and Roger Buchanan, and great-granddaughters Arianna Paige and Lily Renee. He is survived by his dear, and loving wife, Ilene, his sister Lois Larsen of  Nampa, Idaho, his children Cheryl Buchanan, Maureen (Larry) Legerski, Margo Heck all of Sheridan, his son Duane (Debbie) Harvey of Millville, Utah, 18 loving grandchildren, and 25 great-grandchildren who will all remember his legacy and love.Funeral services will be Friday, November 6th at 11:00am at The Church of Jesus Christ of Latter-day Saint (2051 Colonial Drive) with a public viewing beginning at 9:30am.  Interment will be in the Cowley, Wyoming cemetery Saturday, November 7th at 1:00pm.Memorials to honor Duane may be made to The Church of Jesus Christ of Latter Day Saints Educational Fund in care of Bishop Anderson at 1515 N. Heights Dr., Sheridan, WY 82801.Kane Funeral Home has been entrusted with arrangements.