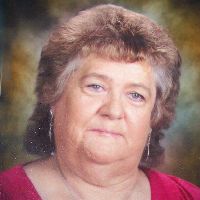 Ellen Kretschman 63, one of God’s strongest soldiers was called to her forever home on March 12 2015.Born October 20, 1951 in Sheridan, Wyoming to Bud and Martha McKenzie. Ellen grew up in Arvada, where she met Johnny the love of her life, at the young age of 14 she knew that she would marry him. Ellen and some of her siblings had went to the Arvada Store to buy some sugar for her mom, when she put the sugar on the counter to pay Johnny said to her “ you don’t need that sugar you are sweet enough” Ellen ran home and instantly told her mom that she just seen the man that she was going to marry. Ellen married Johnny the day after she turned 18, and together they worked and raised their family in Arvada. Ellen worked for the Sheridan County School District #3 for twenty three years. She was known for her delicious meals, and compassionate, and beautiful personality. Everyone that she met, was accepted in her life, and was loved by her without reservation. Ellen always believed there was good in all, and that was what she focused on.Ellen loved Jesus, her family, and all of her wonderful friends. It has been hard for us to let go of her, however, she was anticipating the day she would see her Savior face to face. Ellen is survived by her husband of 46 years, Johnny, her two daughters Lisa and husband Ron Stevens, Tammy Kretschman and six grandchildren, Garett Belus, Gage Belus, Amanda Stevens, Tristin Wilson, Quacy Wilson, and Dylan Collins, three great-grandchildren Carter Duff, Willow Belus, and Kamryn Bliss, also five brothers, four sisters, and numerous nieces, and nephews.She is preceded in death by her parents Bud and Martha McKenzie, brother, Mark McKenzie, sister, Mimie Spencer, and grandson Brandon Calliham.In lieu of flowers the family would like donations to be made to a cancer foundation of your choice, or plant perennial flowers in Ellen’s honor.A celebration of her life will be celebrated at a later time.Kane Funeral Home has been entrusted with arrangements.

Date:
Start Time:
A celebration of her life will be celebrated at a later time.
Location:
Tribute VideoService VideoService Brochure