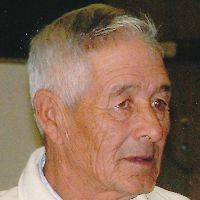 Edward Elias Trujillo our beloved husband, father, grandfather, uncle and friend passed away at his home on April 27, 2017, surrounded by his family. He was born October 23, 1937, in San Luis, Colorado to Elias Trujillo and Felipita Martinez Trujillo. He married the love of his life Mary Helen Serrato in Sterling, Colorado on October 22, 1955.Ed and Mary have spent the last 62 years building their home and family in Sheridan. Ed worked as a contract worker in the home construction business. All those who knew him, knew his speciality was in cement work. He passed his skills down to his children and anyone willing to learn. He worked hard until his body couldn’t take the manual labor anymore, but that never stopped him from helping family and directing the work.Ed loved fishing and hunting. His first love was fishing, and he loved sharing his love of fishing with anyone willing to tag along on an adventure with him. His car was always loaded and ready to go catch some fish. In October he always looked forward to hunting with his boys and grandkids. Even if he wasn’t hunting something he was always up for the trip to go.He was known for his huge garden he planted every year. His kids and grandkids remember how large it once was, but as time went on the garden got smaller. Smaller to him was still large to most of us. He enjoyed every bit of gardening, especially being able to do it with Mary.He was the first person to help anyone in need. He was the rock of the family, but he knew he couldn’t have done it all without Mary. He has inspired so many and loved so many. He has taught his children, grandchildren and great grandchildren what true unconditional love is. He has impacted so many lives in so many ways. Ed never met a stranger, they were always a friend.He is survived by his wife of 62 years Mary, his sons Ed (Sharon) Trujillo, Bo (Carolyn) Trujillo and Jim Trujillo, his daughters Teresa (George) Sherard, Virginia (Rick) Coleman, Patsy (Ron) Sorenson, Annette Trujillo, Melodee Mckenzie and Lori Trujillo, his grandchildren Joshua (Emily) Barker, Sarah Trujillo, Michelle (Steven) Haugen, Kathy Coleman, Sandy Coleman, Melissa Trujillo, Ryan Trujillo, Megan (Jeremy) Badgett, Breanna (Arron) Stone, Danielle Trujillo, Tyler Trujillo, Nikki (Isaac) Bengochea, Adam (Kayhlin) Sorenson, Jacob Sorenson, his great-grandchildren Alex, Evan, Haley, Brent and Trinity Barker, Micheal and Jon Haugen, Jeffrey Shanor, Isabelle, Lana and Lane Badgett, Emma and Bexton Stone, Hadlee, Pete and Maite Bengochea, Bailey Sevy and Camden Sorenson, his siblings Sam (Linda) Trujillo, Ernie (Cynthia) Trujillo, Alice (Pete) Sosa, Bert Willey, Susie (Leroy) Westika and Ruth (Dick) Mounds, his step grandchildren Tiffany, Jesse, Ashley, Laura and Taylor, and his good friend Matthew. He is also survived by his large extended familyEd is preceded in death by his parents, Elias and Felipita Trujillo, his siblings Ben, Delia, Celia, Silviano Sr, Rose and Don, his son-in-law Ron Sorenson, his granddaughter Ashley Louise McKenzie, his great grandchildren Bethany Shanor and Cadyn Trujillo.A Memorial Service will be held at 3:00 p.m. on May 5, 2017, at Kane Funeral Home with Pastor Dan Keller officiating. A reception will be held at the Big Horn Mountain Eagles #1760 in the Commercial Park. A private inurnment will take place at a later date.Kane Funeral Home has been entrusted with arrangements.