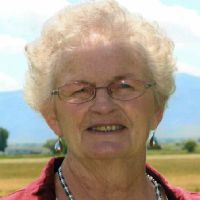 Eilene F. Roadifer, 77, of Sheridan, passed away on Monday, September 28, 2015, at the Welch Cancer Center. She was born on May 14, 1938, in Goshen, IN, to parents Paul and Madilyn (Watts) Johnson.Eilene enjoyed art, sewing, horseback riding, meeting with friends for coffee, shopping, meetings at the Women\'s Clubs and especially spending time with her family and grandchildren. She was a member of the First United Methodist Church and the Big Horn Women\'s Club.Eilene was preceded in death by her parents. She is survived by her children, Marshall (Cindy) Roadifer of Mesa, AZ, Michael (Pat) Roadifer of Emmett, IA, Ramie Roadifer of Sheridan, Murray Roadifer of Sheridan, Stacey (Leanne) Roadifer of Sheridan, her lifelong companion, Bill Cherni, siblings, Kay (Dave) Eaton of Mantachie, MS, Richard (Randi) Johnson of Glen Ellyn, IL, eight grandchildren and thirteen great grandchildren.A Celebration of Life will be held at 10:00 on Thursday, October 8, 2015, at Kane Funeral Home with Pastor Don Derryberry officiating. A reception will follow at the Roadifer Ranch.Memorials to honor Eilene may be made to the Welch Cancer Center at P.O. Box 391, Sheridan, WY 82801.Kane Funeral Home has been entrusted with arrangements.