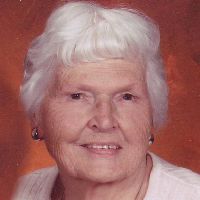 Elaine Small, 89, of Story, passed away on Thursday, November 9, 2017, at Sheridan Manor in Sheridan, Wyoming. Elaine Margaret Mattson was born March 13, 1928 in Bruce Crossing, Michigan to parents Albert and Sophia (Niskanen) Mattson.Elaine graduated from Ewen High School in Ewen, Michigan in 1946. She married Clement Robert Small on June 30, 1951. They made their home in Libertyville, Illinois and raised two children, Steven and Sally. The family moved to Livonia, Michigan in 1969 when Clement accepted a job transfer and resided there until he retired in 1986. They returned to Elaine’s hometown of Bruce Crossing purchasing and renovating Elaine’s childhood home. The couple moved to Clear Lake, Wisconsin in 1999 to be closer to Sally and their two grandchildren. After Clement passed away in 2006, Elaine moved to Story, WY. in 2007 to live with her son, Steven.Elaine was a member of the Grace Chapel Church in Story, the Story Woman\'s Club, and a lifetime member of the VFW Women\'s Auxiliary. She enjoyed painting, sewing, baking, playing cards, pet sitting, and spending time with friends and family. Earlier in her life, she enjoyed being a Cub Scout Den Mother, PTA member, and Women’s Fellowship groups. She especially enjoyed reading and appreciated the services of the Story Library. She also enjoyed her friendship with the Story “Senior Lunch Crew”. All who knew her will remember her outgoing personality, knowing smile, quick wit and the pride and determination (SISU) of her Finnish heritage.Elaine was preceded in death by her parents, husband, sister Lyla Kamariainen, and brothers Leo, Harry, Lawrence, and Reino. She is survived by her son, Steve Small of Story, WY, daughter, Sally (Earl) Langlois of Clayton, WI, grandchildren, Patrick Langlois and Nyssa Langlois, sisters-in-law Marilyn (Leo) Mattson, Rose (Harry) Mattson, Sandy (Reino) Mattson, and numerous nieces and nephews and their children.A family graveside remembrance service will be held in 2018 followed by internment in Hillside Cemetery in Bruce Crossing, MI. next to her husband.In lieu of flowers, the family requests donations can be made in memory of Elaine to Grace Chapel in Story WY, The Story Woman’s Club, The Story Library, or The Hub on Smith (former Sheridan Senior Center) in Sheridan, WY.Kane Funeral Home has been entrusted with arrangements.