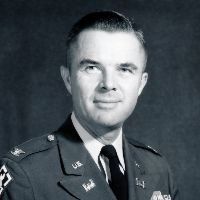 Elisha James (Jim) Fuller died Wednesday April 13, 2016, at age 93. He was born on May 12, 1922, to Lawrence S. and Clara (Fowler) Fuller.  He was raised on the Fuller family ranch, the Lazy YC, at the mouth of the Little Horn Canyon.  He graduated from Sheridan High School, the University of Wyoming , the U.S. Military Academy at West Point, and the University of California (Masters degree in Civil Engineering).  He graduated from the Army Command and General Staff College at Fort Leavenworth and the Army War College at Carlyle Barracks, Pennsylvania.  Between two deployments in Korea, he met and married Norma Brownell, daughter of Colonel James and Vera Brownell. Norma and Elisha were married for 65 years.  They had twin sons, Colonel Robert (Kathy) Fuller who works for Secretary of Defense in the Pentagon and James Fuller, an electrical engineer who works for Worley-Parsons in California.  Their daughter Alice married Dana Kerns and lives on a ranch north of Sheridan.  She is teaching at Slack School on Pass Creek. He is survived by one brother, Charles (Marilyn) Fuller, five grandchildren, Brendon (Erin) Kerns, Trent (Alicia) Kerns, Taylor ( Cathryn Cayton) Kerns, Elizabeth Fuller, Joanna Fuller, three great grandchildren, Sanibel, Capri, and Carston. He was preceded in death by his parents, two brothers, Lawrence “Bud” and David Fuller.After graduating from West Point, he stayed in the Army for 26 years.  His first tour in Korea was as a battery commander with the 7th Infantry Division Artillery.  His second tour was during the Korean War where his unit was part of the amphibious landing over the beaches near Wonsan, North Korea.  This was followed by a difficult retreat to Navy ships after the Chinese entered the war.  He was a plans officer and then a company commander of a combat engineer battalion.  During the India-China war of 1963, in the Himalayan Mountains, he assisted the supply engineer equipment to the Indian Army.  During the Vietnam War, he was Deputy Commander of the 20th Engineer Brigade building roads and bridges in South Vietnam.  Other assignments included commander of a construction battalion at Fort Leonard Wood, MO; Resident Engineer during the construction of the first 100 nuclear tipped Minuteman Missile silos near Great Falls & Lewistown, Montana; three years as a construction programmer in Heidelberg, Germany; and five years in the Pentagon on the Army Staff and the Joint Services Staff.After retiring from the Army in 1972, he worked for the next 15 years for the HDR Engineering firm in Omaha, Nebraska.  First as a project manager and later as a vice president.  After retiring again in 1987, he worked on special projects in Florida and Shanghai.  He retired again in 1999.  After living in Omaha for 42 years he and his wife moved from Omaha to Sheridan in 2013.A Memorial Service will be at 10:00 a.m.on Friday April 22,2016 at the Chapel at St. Peters Episcopal Church with Father John Meyer Officiating.  An Inurnment with Military Honors will be at the Sheridan Municipal Cemetery. A light lunch will follow at the Kane Reception Hall.  Kane Funeral Home has been entrusted with arrangements.Colonel Fuller was a veteran of four wars: -World War II:  an infantry private, then a West Point cadet -Korean War: captain, company commander, 73rd combat engineer battalion -India-China War of 1963-64 in the Himalayas:  a major, U.S. Military Assistance Mission -Vietnam War: Deputy Commander 20th Engineer Brigade.