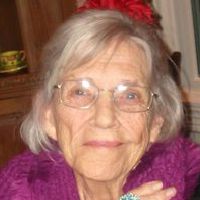 Ellen Louise Wallick, 91, of Sheridan, passed away on Thursday, June 5, 2014 at Green House Living for Sheridan.Her journey began on December 24, 1922 when she was born to parents William and Bertha Coonrod in Butler, Missouri. She attended Drury College in Springfield, MO, majoring in Home Economics and was a member of the Tri Delta Sorority.She married Robert Wallick in 1941 (later divorced) and they moved with their two children to Wichita, Kansas In 1949. Ellen worked for The Boeing Company for 35 years in the cost accounting department, developing new proposals for future internationalaircraft manufacturing contracts. She began her next chapter at the age of 70 traveling the world: New Zealand, France, England, Italy, Greece, Ireland, Mexico and many other exciting places. Volunteering became her main avocation, servingas President of Women’s Aeronautic Association, President of the Knife and Fork Club, and on the board of Shepherd’s Center of Wichita. Ellen was a supporter of many causes focusing on human rights, believing that all are born free and equal.She was an avid reader and was known for her keen sense of humor.Ellen moved to Sheridan to be closer to her children in 2008 living at Sugarland Ridge and then moving to an apartment in Big Horn before moving to the Green House in 2013.She is survived by her son Robert Wallick, Jr. and his wife Cathie Wallick of Big Horn, WY; daughter Kay Wallick and her husband D.J. Purcell of Big Horn, WY; and granddaughter Lee Wallick Richmond and her husband Tim Richmond of Somerset,England and grandson William Wallick and his partner Jason Sarmiento of Phoenix, Arizona; and her “other” daughter Dixie Buss of Overland Park, KS.Memorials to honor Ellen may be made to Green House Living for Sheridan, 2311 Shirley Cove, Sheridan WY 82801, her beloved home for the last year.Her life will be celebrated at a reception on Sunday, June 8, 2014 at 1:00pm at Green House Living for Sheridan, 2311 Shirley Cove, Founders Cottage.Kane Funeral Home has been entrusted with arrangements.