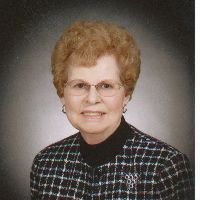 Eloise C. McAllister, 89, of Casper, passed away on Monday, October 6, 2014, at the Westview Health Care Center in Sheridan.Eloise was born on January 23, 1925 in Moorcroft, WY to parents Lucian Hebert and Emily (Sapp) Robinson. She graduated from Moorcroft High School. Her first marriage was to Gerald Wayne Strong, together they had their son Gary. Her husband Gerald passed away three years later. She married William C. McAllister on April 29, 1947, then they had two children, Michael James and John Milton.Eloise was a homemaker, she donated much time to the Blue Envelope Health Fund in Casper, she help promote the new throat culture program for the elementary students for strep throat and was also a long time blood donor, she surpassed her ten gallon donation mark. She enjoyed ceramics.Eloise was a wonderful mother, wife, and friend. She will be dearly missed by her family and friends.Eloise was preceded in death by her parents Lucian Herbert and Emily Robinson, her brothers Lucian Robinson II, Alden Robinson, and her sisters Ardis Bisauta, Beverly Swinton, and Joyce Adler, and her grandson, John William McAllister.She is survived by her sons; Gerald “Gary” McAllister of Hays, KA, Michael McAllister of Port Hadlock, WA, John McAllister of Livermore, CA, grandchildren; David Thomas, Jaime Lynn and Michael Wayne, and her great grandchildren; Cody, Coltin, Sterling, and Shadin.Memorials to honor Eloise can be made to the Blue Envelope Health Fund,PO Box 2177, Casper, WY 82602.Kane Funeral Home has been entrusted with arrangements.