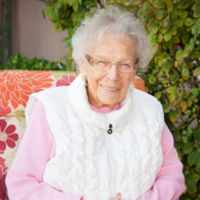 Elsie Black, age 89, passed away peacefully on Monday, January 13, 2014 in Mesquite, NV, surrounded by her loving family. Elsie was the second oldest of seven children, born April 14, 1924 in Arvada, WY to George and Elizabeth (Jane) Campbell Bartholow. Elsie was raised in the Sheridan area, graduating from Sheridan High School in 1942. After her graduation she moved to Upton, WY and began a career with CB&Q Railroad as a telegraph operator. It was during this time she met and married Joseph (Ed) Dillin on November 7, 1944 in Hardin, MT. To this union Ed brought daughters Ethel and Edna. Together, Elsie and Ed added son Tom and daughters Sharon, Carol, Mary, and Betty to their home in Upton. After Ed passed away in 1971, Elsie later returned to Sheridan where she met and married Leroy (Bud) Black on December 3, 1976. To this union, Bud brought a son Shelley and two daughters, Sherry and Sharlotte. Bud passed away in August 2002 and Elsie remained in Sheridan until August 2010 when she moved to Mesquite, NV.Elsie was an avid jetsetter in her later years and enjoyed the best of all worlds, spending her winters in Nevada at the homes of daughters Sharon and Mary and her summers in Wyoming and South Dakota at the homes of daughters Carol and Betty and son Tom. She was a Diva and her children ensured she lacked for nothing. She enjoyed many experiences such as a stagecoach ride and trips up the Enchanted Highway in North Dakota, annual trips to South Dakota’s Mount Rushmore, the Badlands, and the 1880 Train, annual trips to Wyoming’s Devils Tower, riding a camel in Palm Springs, California, walking the Grand Canyon Skywalk, a helicopter tour of Hoover Dam, and many others in between.Elsie leaves behind her sister Louise Ralston of Sheridan, WY; her children, grandchildren, great-grandchildren, great-great grandchildren, and their families-sons Tom (Gayle) Dillin of Piedmont, SD and Shelley (Anita) Black of Pine Haven,WY; daughters Sharon (Dick) Van Winkle and Mary (Brad) Shurtleff of Mesquite, NV, Carol (Tom) Harrison and Sharlotte (Mike) Pulver of Gillette, WY, Betty (Mike) Finn of Upton, WY, Ethel Shelton of Escondido, CA, and Sherry (Don) Kelley of Douglas, WY, as well as numerous cousins, nieces, and nephews.Welcoming her to Heaven are her parents George and Elizabeth Bartholow, husbands Ed Dillin and Bud Black, sisters Alice Zimmerschied, Marian Krenzlok, and Marge Bowman, daughter Edna Honeycutt, son-in-law Ron Clyde, grandson Jacob Black, and siblings lost during early childhood-brother Bruce and sister Gladys Lorene.The family would like to take this opportunity to express their sincere thanks and gratitude to Dr. Salem, Dr. Empey, and the entire staff of Mesa View Regional Hospital for their excellent care and compassion during their mother’s final days.A special thank-you also to Elsie’s CNA/companion Andrea Aguilar-Palomar, who she loved and considered her Special Angel. Andrea loved Elsie too and was a truly a Godsend the last couple months of her life.