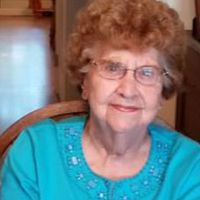 ‍Elsie Darlene Destefano, 86, of Sheridan passed away on Wednesday, January 24, 2018, at the Sheridan Memorial Hospital. She was born in Mitchell, Nebraska on July 27, 1931, to parents Henry and Lydia (Hettinger) Lackman. Her family moved to Sheridan when she was 2 years old.Elsie married Alfred (Al) Destefano in Sheridan on June 22, 1952. They spent 65 wonderful years together. Elsie was a wonderful and devoted wife, mother and grandmother. She enjoyed reading, cooking, sewing, crafts, watching the Denver Broncos and spending time with her family, especially at the family cabin in the Big Horn Mountains.Her greatest joy was caring for and spending time with her grandchildren. She was delighted to attend any and all of the activities in which they were involved. All of the Destefanos and extended family will miss her loving attention and wonderful home cooking.No one could match Elsie when it came to spoiling her grandchildren at Christmas and on their birthdays. She truly loved all children and was always happiest when in the presence of her kids and their kids. Elsie sang and taught “You are My Sunshine, My Only Sunshine” to all the grandchildren when they were young, and was most excited when a new grandchild would join the family.Elsie was preceded in death by her parents, daughter Sandra Jean Destefano, grandson Eric Destefano, sister Helen Powers and brothers Henry, Alex, Edward, and Rubin. She is survived by her husband Al, sons Richard, Ronald (Cinder) and Darold (Jennifer) Destefano and her grandchildren Zach (Beth) Root and Alex, Brent, Jillian, Sophia and Dominic Destefano.Services will be held at 10:00 a.m. on Monday, January 29, 2018, at Kane Funeral Home with Reverend Rene G. Castillero officiating. A reception will immediately follow in the Kane Reception Hall.Donations to honor Elsie may be made to the Immanuel Lutheran Church, 1300 W. 5th St., Sheridan, WY 82801.Kane Funeral Home has been entrusted with arrangements.