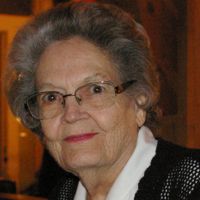 Emma Lou Burt Price, 84, of Sheridan, went to be with her Heavenly Father and join the love of her life on Saturday, July 26, 2014.Emma Lou was born on December 14, 1929, in Laurel, MS to Odis Clarence and Ada Kate Fitzgerald Burt. The Burt family lived in Laurel where her parents worked at Laurel Cotton Mill until they moved to Meridian, MS in 1944. She graduated from Meridian High School with honors in 1947. She went to work for Southern Bell Telephone Co., after attending a year of college at Meridian Junior College. Emma Lou married Jesse Winston “Buddy” Price on August 3, 1949. Buddy was in the Navy at the time of their union, and they lived in Alameda, CA for a short time. After his discharge they made their home in Toomsuba, MS where they raised two sons and a daughter.She retired from the Mississippi State Employment Service in January of 1989 after 21 years of service. She spent much of her retirement researching her family heritage as well as her husband’s family. She was an active member of Samuel Dale Chapter, Daughters of the American Revolution with four proven American Revolution ancestors. She was valuable in the genealogy community helping others research their families. She established many online friendships built through her research into the genealogy of different family trees. She was blessed to be actively researching genealogies up until a few days before her death.She also enjoyed spending time with her children, grandchildren, and great grandchildren, reading the Bible, picnics in Story, collecting rocks of all shapes and sizes, and feeding the birds and rabbits in her backyard. Her great grandchildren were near and dear to her heart and she always had a special treat for them when they visited her. She considered herself “wonderfully blessed” to have enjoyed 60 years of marriage with the last 20 spent in retirement with the man she loved in their hometown of Toomsuba, MS.She was a member of the Toomsuba Baptist Church from the time she moved to Toomsuba in 1949 until she moved to Sheridan in 2011. She joined the St. Peter’s Episcopal Church and faithfully attended the services led by Juanita Smith at Sugarland Ridge every Tuesday that she was able to attend. Emma Lou was a generous, caring and loving soul, who always put the thoughts and needs of others before her own.Emma Lou was preceded in death by her parents, husband, brother (Adron Burt), baby sister (Iris Yvonne Burt), grandson (Jesse Alan “Al” Price, Jr.), and step grandson (Christopher Sullivan). She is survived by her children and their spouses, Alan and Janet Price of Toomsuba, MS, Jeff and Jan Price, also of Toomsuba, MS, and LuAnn and Toby Frey of Sheridan, WY. She is also survived by grandchildren and their spouses Jessica and Brad Griffin, Crystal and William Shelby, Jonathan Price, Teri Ann Frey, Jeremy Price, Amy and Cody Mason, Alyson Price, and step grandchildren and their spouses Jeremy and Shantell Sullivan and Amy and Jason House. She was blessed with ten surviving great grandchildren and six step great grandchildren.Memorials to honor Emma Lou may be made to St. Peter’s Episcopal Church at 1 South Tschirgi, Sheridan, WY 82801.Services will be held at Sugarland Ridge at 10:00 am on Saturday, August 2, 2014.Kane Funeral Home has been entrusted with arrangements.