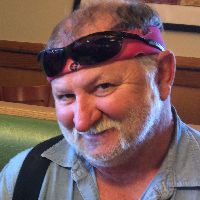 Eric Wayne Ransom, 54, of Sheridan, passed away on Tuesday, May 2, 2018, unexpectedly at his residence.Eric was born in Casper, WY to Earnest and Violet (Castellaw) Ransom.The fourth of five children. He graduated in 1981. He joined the Marine Corps in January and did his basic training right after graduation.He left for Okinawa in October of that year where he was stationed until he was honorably discharged in 1987.Eric earned 3 Sea Service Deployment Ribbons, a Good Conduct Medal, a Marksmanship and Pistol Marksmanship Medal and received the Presidential Citation for Master Communication Center Operator.Upon returning home he worked in the oil fields around the state and then returned to truck driving. He recently joined the Decker Coal Mine. He considered it his dream job and told many family and friends he was living a dream, a good job, had a home and was driving his dream pickup.He was preceded in death by his parents. He is survived by a son, Buzz Ransom of Eugene, OR, a daughter, Jasmine (Zackery) Morrison of Russell, KS.Eric\'s biggest love was being a grandfather to his three grandsons, Zander, Ryker, and Kayden. Other survivors include two sisters, Enola (Robert) Snyder of Douglas, Lorie (Greg) Gerard of Douglas, two brothers Allen Ransom of Douglas and Delbert Ransom of Casper. Many nieces, nephews, aunts, uncles and cousins. Eric will be missed by all who knew him. A Celebration of Life, “Block Party” with Military Honors will be held at 3:00 p.m., on Tuesday, May 15, 2018 at 2056 Frackelton, Sheridan, WY. Kane Funeral Home has been entrusted with arrangements.