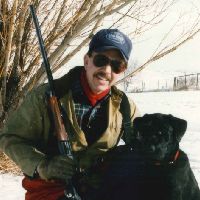 Ernest Jay BradyErnest was born to Lillian Ethel Thomas and Elmer J. Brady, on February 27, 1942. He passed peacefully with his family at his side on January 23, 2015. He faught valiantly against esphogeal-gastric cancer, and the many side effects of treatment.Ernie attended school in West Virginia and graduated from West Liberty State College in West Virginia with a teaching degree in 1965.He married the love of his life, Patricia L. Mains, October 30, 1964.Ernie taught high school in West Virginia until in 1969, when he convinced his wife to persue his dream of living in the great state of Wyoming. He taught at Kelly Walsh High School for many years. He moved his family to Sheridan, Wyoming to be closer to the Big Horn Mountains in 1982. After moving to Sheridan he had a variety of jobs, including working with the mines, and assisting others at the Senior Center. Driving the Mini-bus provided him great joy.Ernie loved bird hunting with his dog Cody, four-wheeling, snowmachining, camping, and anything that meant he was with his family.His parents proceeded him in death.Ernie is survived by his wife of 50 years, Pat Brady, his daughters Kelly & (Mike) Thornton of Sheridan, and Darby & (Jeff) Keller of Sheridan.His two grandchildren, Justin Keller stationed in the UAE and Aryia Reeves of Sheridan completed his life. Just when he thought his family couldn\'t get any greater, he was given a great-grandchild, Jeffrey James Keller of Texas.Ernie was a big supporter of the American Cancer Society, 333 S. Beach, Casper, WY 82801 and the Sheridan Dog and Cat Shelter, 84 East Ridge Road, Sheridan, WY 82801. Rememberences may be made to these organizations.Abiding by Ernie\'s wishes, there will not be a service. He requested that his family spend an evening celebrating his life, and enjoying the great memories that were made.Kane Funeral Home has been entrusted with arrangements.