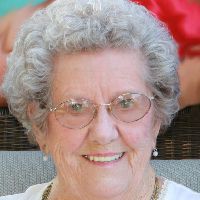 Esther Kreger Graves Badget, 97, of Sheridan, passed away peacefully on Sunday, October 8, 2017, surrounded by her loving family.Esther was born on July 26, 1920 to parents John and Molly (Barrett) Kreger in Sheridan, WY. At three months old, she was baptized at the Immanuel Lutheran Church and remained a member her entire life. She married Richard (Dick) Eldon Graves on November 9, 1939. They had two daughters, Sharon Tracy and Shirley Lehr. Ever an entrepreneurial spirit, she and Dick bought and sold homes, had one of the first automatic car washes, and opened the fourth KOA Campground in the United States. The KOA became a turning point in their life. In every endeavor, she was the “go-to-gal”. Dick passed away in 1975.She married William (Tink) Badget in 1981. They loved spending their summer weekends in the Big Horn Mountains making fond memories of fishing, hunting and entertaining family and friends. For many years, their home at 240 Coffeen Avenue was decorated in the spirit of Christmas. It was a family tradition to turn the lights on after Thanksgiving dinner. Esther loved working in her flower beds on Coffeen Avenue and they won “yard of the month” one summer. Tink passed away in 2005.A child of the Depression, Esther knew the value of hard work and self-sufficiency. When she rode her horse to SHS the first day of school, other students made fun of her and she never went back. All her remarkable accomplishments were done with an 8th grade education. She left a wonderful legacy for her family to love everyone without judgment and taught them the balance of kindness and strength.She enjoyed sewing, was self-taught and became a professional seamstress, sewing for many people in Sheridan. She made many matching outfits for her children and grandchildren, prom dresses, wedding dresses, and business attire. She won 2nd place in a “Make it with Wool” state competition. Esther was a creative soul, she loved embroidery, crocheting, ceramics, and created a scrap book of her life memories for her daughters and grandchildren. She was a member of Sheridan Horse Patrol, Civic Theater Guild, Acedia Win, Sheridan County Cattle Women, and a Birthday Club.Esther is preceded in death by her parents, John and Molly Kreger, her daughter Shirley Graves Lehr, grandson Jody Tracy, siblings, John Kreger, Herman Kreger, Millie Loeber, Emma Nelson, Ruben Kreger, Victor Kreger, husbands Dick Graves and Tink Badget. She is survived by her daughter Sharon Tracy, grandchildren, Jandee Tracy, Tonya (Rob) Aksamit, Shane Tracy, Shannon Tracy all of Sheridan, Lynne (Don) Lehr-Buck, Lorri Leipold both of Denver, CO, Greg (Jill) Lehr of Coronado, CA, Lance (Andrea) Lehr of Erie, PA. Also, great grandchildren Brooke, Bailey and Bree Aksamit, Sam Sampson, Brayden and Sierra Tracy all of Sheridan. Kelly Buck and Sandy Buck (Ben Konicek), Allie, Bri, Ashley, Emily, Andrew, and Christopher Lehr, Jenny (Jesse) Treveton, Elizabeth and Katie Leipold, Nicole (John) Herring along with three great great grandsons Jonah, Jaxton, and Jerrick Herring.A Memorial Service will be held at 10:30am on Friday, October 13, 2017, at Kane Funeral Home. A gathering will follow in the reception hall. Burial will be private.Memorials to honor Esther can be made to the Sheridan Senior Center, .211 Smith Street, Sheridan, WY 82801.Kane Funeral Home has been entrusted with the arrangements.