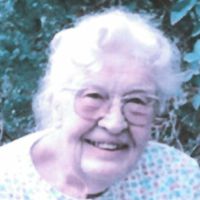 Evelyn Moore Horn died on Sunday, June 2, 2013 of lung cancer and complications of dementia. Born in Fairfax, Missouri, Evelyn spent her youth traveling the United States with her parents, Oakley and Lucy Moore. After World War II, Evelyn\'s parents were hired to teach in Sheridan. Evelyn graduated from Sheridan High School and attended University of Wyoming in Laramie. She transferred to Montana State University in Bozeman and graduated with a degree in Home Economics. During her tenure as a Home Economics teacher in Thermopolis, Wyoming, she met her husband, Jack Horn. Jack\'s work as a civil engineer took them to many different locales. Jack and Evelyn returned to Sheridan, Wyoming in 1987.During their 54 years of marriage, Jack and Evelyn were blessed with four children: Jenilynn, Robert, Paul and Ruthann. They have seven grandchildren (Tomas, Heidi, Eric, Joshua, Rylie, Ingrid and Daniel) and three great-grandchildren (Noah, Alice and Hannah). Evelyn was preceded in death by her brother, Robert Moore, and daughter Jennilynn Horn.Evelyn desired that there be no formal services, instead asking that people donate to the Sheridan YMCA at 417 N. Jefferson, Sheridan, Wyoming 82801, the Sheridan Senior Center at 211 Smith Street, Sheridan, Wyoming 82801 or to the Hospice of the Big Horns at 1401 W. 5th Street, Sheridan, Wyoming 82801.Kane Funeral Home has been entrusted with arrangements.

Date:
Start Time:
Evelyn desired that there be no formal services, instead asking that people donate to the Sheridan YMCA.
Location:
Service VideoService Brochure