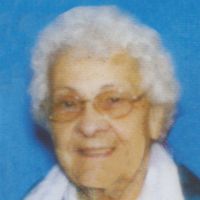 Evelyn M. Dinkel, 94, of Dayton, passed away on Monday, May 13, 2013 at the Memorial Hospital of Sheridan in Sheridan, WY.Evelyn was born on February 23, 1919 to Herman and Lizzie (Kallath) Fuhrman in Hoskins, NE. She was baptized and confirmed at Trinity Lutheran Church in Hoskins, . She attended school district 85, Trinity Lutheran School and later graduated from Norfolk High School in 1937.Evelyn married Loren (Bud) Dinkel on October 3, 1943 at Trinity Lutheran Church at Hoskins. The couple farmed south of Hoskins for 40 years. Loren passed away in 1983. She then moved to Norfolk in 1984 and then moved to Dayton, WY in 2006 to live with her son, Gene and daughter in law, Teresa.Evelyn loved to play cards, garden, and do a lot of crocheting, but dancing was her favorite.Evelyn was preceded in death by her parents, her husband, sister Leona and brother in law Gilbert . She is survived by two son\'s, Gene (Teresa) Dinkel of Dayton, WY, and Curt Dinkel of Norfolk, NE, two grandsons, Casey Dinkel of Palmer, AK, and Cassius Dinkel of Lincoln, NE, along with one great grandaughter, as well as numerous nieces and nephews, also, sister in law Geradine (Gerald) Rossmeier.A Memorial Service will be at 10:00 a.m. on Saturday, July 6, 2013 at Trinity Lutheran Church in Hoskins, NE with Pastor Rodney Rixe officiating. An Inurnment will follow at Hillcrest Cemetery in Norfolk.Kane Funeral Home has been entrusted with arrangements.