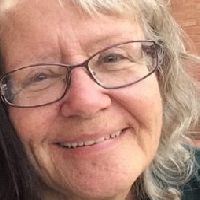 The beautiful soul of Fayanne Elizabeth Allison left this world February 17, 2017 peacefully at home with her husband by her side. She will forever remain in our hearts.Fay was born December 12, 1946 to Merlin & Virginia (McNutt) Finn in Hampton, Iowa, joining three older brothers. Fay grew up in Goodell and Belmond, Iowa until her family moved to North Dakota. While in school she competed on the swim and trampoline teams. The family moved to Wyoming where she met and married Frank King in 1964 in Cheyenne, WY. They had two children, Sheila and Frank, Jr. Frank and Fay later divorced in 1982.Fay met and later married Arthur “Joe” Allison on July 4, 1986. They spent their 31 years of marriage enjoying camping, fishing, boating and traveling together.Fay was a feisty, adventurous soul that enjoyed being around her family and meeting new people. Her out going spirit and love of people allowed her to try many types of employment including Cashier, Secretary, working at a dynamite plant testing and delivering dynamite to coal mines, she worked at Sheridan Memorial in home care and Radiology, a camp host in the Big Horn mountains and while working for a local construction company she learned how to operate a Komatsu loader.Some of her favorite opportunities were working with CASA, McDonalds where she met and enjoyed working with exchange students from Brazil, Czechoslovakia and Thailand. At the time of her death she was a proud employee of the Sheridan VOA Homeless Shelter at the V.A.Fayanne is proceeded in death by her parents, brothers James and Terry Finn, son Frank B. King, Jr., stepson Arthur Allison, Jr. and granddaughter Sgt. Jaymie Allison.She is survived by her loving husband Joe, brother Robert Finn of Aurora, CO, daughter Sheila Hamilton (Scott) of Sheridan, stepson James Allison (Michael) of Big Horn, stepdaughter Judy Collins (Patrick) of Cheyenne, WY, her grandchildren Stefanie Miller (Trestian) of Casper, Mary Zemski of Sheridan, Erin Jones of Auburn, CA, Amber Allison of Texas, Autumn Mullenix (Dylan) of Brazil, IN, Sean Collins and Jack Collins of Cheyenne, WY, Caleb Hamilton (Danielle) of Evanville, MN and Haydn Hamilton of Minneapolis, MN and her 17 great-grandchildren.There will a private family celebration of love, life and laughter for Fay.In lieu of cards and flowers the family asks that donations be made to the Sheridan County VOA Homeless Shelter, PO Box 6248, Sheridan, WY 82801 in honor of Fayanne Allison.Kane Funeral Home has been entrusted with arrangements.