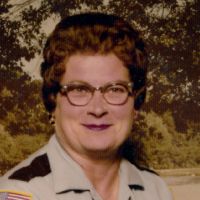 Fern Lorraine Adsit Focht, 82, of Sheridan, passed away on Sunday, March 27, 2016, at the Sheridan Memorial Hospital. She was born on March 11, 1934, in Sheridan, WY, to parents Arthur and Bertha (Mooney) Nelson.Fern grew up on Murphy Gulch and attended a one room school house on Murphy Gulch. She graduated from Big Horn High School.Fern lived for family and friends. Fern retired from the City Police Department as the “Meter Lady” many people in Sheridan knew her. Fern loved site seeing humming birds. In her past time she read many, many books.  She made coffee for Heritage Towers for many years and everyone will miss her coffee. She took care of her son after his motorcycle accident. She especially loved her children, grandchildren and great grandchildren.She was preceded in death by her parents, husbands; Harry Adsit and Raymond Focht, sister, Lorna Boodie, and brother, A.F. Nelson,. She is survived by her children; Sharon (Allen) Clemens of Sheridan, WY, Charles “Chuck” Adsit (Mary Sterling) of Big Horn, WY, brother, Clarence Nelson of Sheridan, WY, two grandchildren; Tanya Jalovich, Misty Jalovich, four great grandchildren; Tanner, Cameron, Tryce and TeAnna. A Memorial Service will be held at 2:00 p.m. on Thursday, March 31, 2016, at Kane Funeral Home with Reverend Kevin Jones officiating.Memorials to honor Fern may be made to the Sheridan Senior Center at 211 Smith St., Sheridan, WY 82801. Kane Funeral Home has been entrusted with arrangements.