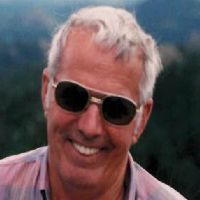 Floyd Fleming, 77, of Sheridan, passed away on Saturday, October 24th, 2015, after a long illness. He was born in Plentywood, MT, on October 24, 1938 to Floyd Sr. and Signe Fleming of Redstone, MT.Floyd is survived by his wife, Phyllis, his two children by a former marriage: Sonja Fleming with granddaughter Nikki Garcia of Thornton, CO, and James Fleming of Gillette, WY, sisters, Barbara Fleming of Center, ND, and Patricia Fleming of Havre, MT, step-sons, Kevin Palmer (Jody) of Sheridan, WY, and Russell Palmer (Stacy) of Grand Junction, CO, and five step-grandchildren: Kevin Shay, Kody and Kayden of Sheridan, Skyler (Bonnie), their daughter, Zoey of Fredonia, AZ, and Caitlyn of Grand Junction, CO. He was preceded in death by his parents, and a sister, Sonja Lee who died in infancy.No Services are planned. His ashes will be inurned at Redstone, MT, at a later date. Floyd was a well known water well driller in the Sheridan area, at one time serving on the board of directors of the Wyoming Water Well Association. He enjoyed participating in stock car racing and demolition derbies. He has been a member of the Sheridan Elks Lodge for 43 years. He will be missed by many.Kane Funeral Home has been entrusted with arrangements.

Date:
Start Time:
No Services are planned. His ashes will be inurned at Redstone, MT, at a later date.
Location:
Tribute VideoService VideoService Brochure