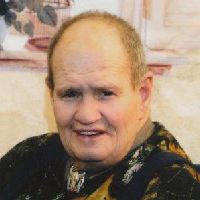 Francis “Gene” E. Pitt, 70, of Sheridan, passed away on Tuesday, February 9, 2016, at the Sheridan Manor. He was born on August 28, 1945, in Sheridan to parents Francis and Edna (Johnson) Pitt.Gene enjoyed fishing, bowling, helping his best friend James Dennis, spending time with “CHAPS” and most of all giving everyone a hard time, including his sister, Donna. He was a participant of RENEW for over 25 years and will be greatly missed by the staff and participant\'s there and by everyone that knew him. He was a member of the Nazareth Church. Now he is in a place where he can fish and ride horses in no pain and be with his mom and dad.Gene was preceded in death by his parents. He is survived by his two sisters, Donna (Jeff) Stewart of Fruita, CO, Nancy (Mike) Kirton of Chamberlain, SD, two nephews, David Stewart of Grand Junction, CO and Daren Stewart of Ft. Bragg, NC.A Celebration of Life will be held on Friday, February 26, 2016, from 11:00 a.m. to 1:00 p.m. at RENEW, 1969 S. Sheridan Ave.Kane Funeral Home has been entrusted with arrangements.