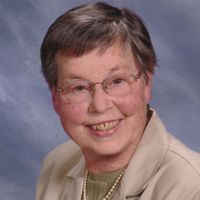 Frances K. Ruzicka, 89, of Sheridan, passed away on Friday, January 15, 2016, at the Sheridan Memorial Hospital. She was born to parents, Gasper and Anna (Kozuh) Krek on July 30, 1926, in Rock Springs, WY, and was raised in Reliance, WY. She graduated from Reliance High School with perfect attendance as Valedictorian and then attended the University of Wyoming where she received her teaching degree. She married John Ruzicka in Rock Springs, WY, on August 17, 1947.                                    Frances was a homemaker while raising her three children, Gary, Kathy and Francy. Later she went to work as a Teacher\'s Aide at the Coffeen Elementary School for twelve years then, retired. Teaching was her passion, but she enjoyed gardening, fishing, hiking in the mountains, looking at the beautiful wild flowers and traveling the country. Frances was an avid basketball fan, following both the Wyoming Cowboys and the Sheridan Broncs, and she enjoyed playing games with her grand kids. She had a lifelong love and a strong faith in her religion. Frances was preceded in death by her parents, husband, John, two brothers and two sisters. She is survived by her three children, Father Gary Ruzicka of Casper, Kathy (BW) McManus of Sheridan, Francy Hoyer of Big Horn, her brother Frank Krek of Albuquerque, NM, four grandchildren, Bill (Jenni) Luckett, Erin (Brian) Fowler, Megan (Eric) Williams, Melissa (Michael) Phillips and two great grandchildren, Dillon and Morgan Luckett.A Visitation will be held at 6:00 prior to the Rosary at 7:00 at Holy Name Catholic Church on Monday, January 18, 2016. Mass of the Christian Burial will be held at 10:30 on Tuesday, January 19, 2016, at Holy Name Catholic Church with the Most Reverend Paul D. Etienne, DD, STL, Bishop of Cheyenne officiating. Interment will be in the Mount Hope Cemetery with a reception to follow at the parish hall.In lieu of flowers memorials to honor Frances may be made to Holy Name Catholic Church at 260 E. Loucks, Sheridan, WY, 82801 or to the Sheridan Dog and Cat Shelter at 84 East Ridge Road, Sheridan, WY, 82801.Kane Funeral Home has been entrusted with arrangements.