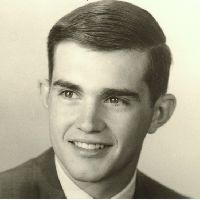 View Service Folder | Click for Video Tribute Frank Leonard Farrington, 70, of Sheridan, WY completed his earthly pilgrimage at home on October 5, 2014, after a 3 year courageous battle with cancer.Frank was born on February 21, 1944 to Albert and Jane (Leonard) Farrington in Butte, MT. He graduated from Butte High School in 1962 at the top of his class. During the summer months while attending Montana State University in Bozeman, MT, he worked in the underground mines of Butte and also in the smelter in Anaconda. Frank graduated from Montana State in 1966 with a Bachelor of Science degree in Pre Med. After a year of graduate school, Frank was hired by IBM as a salesman in main frame computers. His IBM career started in Missoula, MT. After moves to Salem, OR, Seattle, WA, Rochester, MN and finally to Sheridan, WY in 1983, Frank took early retirement from IBM in 1992 as a Systems Engineer with a specialty in the AS400. After his retirement, he started his own consulting business and helped companies with the AS400 from Gillette to Billings. His final retirement was in 2008.Frank married Vickie Hoxsey on June, 22, 1968 in Havre, MT. Frank and Vickie have two children. Tammy Jeske (Rich) of Bozeman, MT and Chad Farrington (Jane) of Boston, MA. They have four grandchildren. Emily and Erik Jeske of Bozeman and Jackson and Calvin Farrington of Boston. Frank was a proud and devoted grandfather to all of his grandchildren.Frank was an avid downhill skier and competed in several giant slalom races. He also enjoyed golf, running (4-6 miles nearly every day), biking to Wyarno, Decker, Beckton, and Big Horn. One of his greatest accomplishments was hiking Blacktooth with his best friend and adventure companion, Chuck Boyer (deceased). He also loved reading John Grisham and Tom Clancy novels. His favorite pastime was working on the computer and helping friends learn about computers.Frank was a founding member of Grace Anglican Church and was privileged that one of the two stained glass windows was dedicated to him.Frank was preceded in death by his parents. He is survived by his wife of 46 years, Vickie, daughter, Tammy and husband, Rich; son, Chad and wife, Jane; grandchildren, Emily, Erik, Jackson, and Calvin; and his brother, Reeve Farrington of Butte, MT.A Celebration of Life will be held at 1:00 on Saturday, October 11, 2014, at the Grace Anglican Church with Reverend Kevin Jones officiating. A reception for family and friends will follow at the church.In lieu of flowers Memorials in his honor may be made to: Grace Anglican Church, 1992 W. 5th Street, Sheridan, WY 82801 or to the Hospice of the Big Horns, PO Box 391, Sheridan, WY 82801.Kane Funeral Home has been entrusted with arrangements.