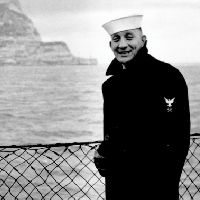 View Service Folder | Click for Video Tribute Frank William Brown, 84, of Sheridan, passed away on Saturday, November 15, 2014, at his residence. He was born in Lansdale, PA on January 4, 1930, to Frank and Miriam (Renner) Brown.Frank was a loving companion, brother, father and grandpa. He served our country in the US Navy from 1947 – 1967. He was an officer for the Newport, CA, Police Department from 1964 – 1987. After his retirement in 1988, Frank moved to Sheridan. He was an avid train collector and enjoyed doing crossword puzzles from the daily newspaper. He was a devoted volunteer at the VA Medical Facility from 1995 until September of 2014. In 1994, Frank met his loving companion, Michelle Underwood. They spent the next 20 years together, loving and caring for one another and her 3 children; Alan Underwood, Allison Underwood and Tre Underwood and their 5 grandchildren; Tristin Evans, Justyce and Graycin Powell, and Landon and Jaden Underwood.Frank enjoyed swapping his old time stories with the customers of the Silver Spur Cafe over coffee. He will be sorely missed by many who loved him dearly.Frank is also survived by his children; Bradley Brown and Bobbi Brown both of TX, and his sister, Ethel Brown of MI.Services will be held at 2:00 on Thursday, November 20, 2014, at Kane Funeral Home with Chaplain Don Verner officiating with Military Honors. A reception will follow in the Kane Reception Hall.Memorials to honor Frank may be made to CASA 429 W. Alger St., Sheridan, WY 82801 or to Joey\'s Fly Fishing Foundation at 109 S. Main St., Ste B, Sheridan, WY 82801.Kane Funeral Home has been entrusted with arrangements.