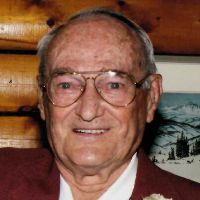 Franklin “Frank” Monroe Shaffer, Sr. passed away Saturday August 6, 2016 at Mountain View Living Center at the Sheridan VAMC.He was born June 24, 1922 to Clarence and Nellie (Bennick) Shaffer, in Sheridan. Frank was a graduate of Sheridan High School. In 1938 and 1940 he was selected as first-string quarter back for the Wyoming High School All State football team.Frank enlisted in the US Navy, attending Navy Signal School in Champagne, Illinois. There he married Marjorie Craft April 10, 1943 and would be married to her for over 66 years. Frank served 38 months in the US Navy, participating in the initial landings at Okinawa and Iwo Jima, where he witnessed one of his proudest memories - seeing the company flag, followed by the US flag, raised at “Hot Rocks” on Iwo Jima.After proudly serving in the Navy, Frank worked 30 years at the US Post office, retiring as the Assistant Post Master.Loving golf, Frank was named the Wyoming State Amateur Golf Champion in 1941 and 1956, City Golf Champion 7 times, and Club Champion at Kendrick Golf Course and the Country Club. He served one year as the President of the Wyoming Amateur Golf Association and on the Board of the Country Club. Frank also had a passion for bowling. He was secretary for the City Bowling Association and All Star Bowling League for over 25 years and was director and past president of the Wyoming State Bowling Association. In 1970, Frank was Singles Champion and inducted into the Wyoming Bowling Hall of Fame in 1989.Frank was also an avid sportsman, enjoying hunting and fishing. He played softball and basketball and coached Little League Baseball for several years.Frank served 27 years on the American Legion Boys State Staff, holding both offices as director and committee chairman, department commander in 1971-72, and National Executive Committeeman from 1982-86. From 1987, Frank served 16 years on the National Emblem Sales and 10 years on the National Security Commission. Frank also served 8 years on the Wyoming Employment Security Commission.Frank was preceded in death by his wife, Marjorie, his parents, 3 sisters and one brother. He is survived by his children Sheryll (Chuck) Seagrave, Charlene Lee, and Frank (Sharon) Shaffer, Jr. Grandchildren include Susanne Seagrave (Craig Caplan), Courtenay (Roy) Hansen, Ryan (Tami) Lee, Hayden (Melissa) Lee, Gretchen Shaffer, Giesella (Justin) Johnson, and Gavin Shaffer. He was blessed with six great-grandchildren, Natalie Caplan, Lia and Janna Hansen, Miles and Sienna Lee, and Brynlee Johnson.No services will be held per Frank Sr.’s request. In lieu of flowers, memorials may be made to the donor’s choice.Kane Funeral Home has been entrusted with arrangements.