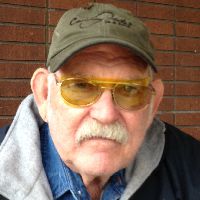 Fred Theodore Fisher, 73, of Sheridan, passed away on Wednesday, July 29, 2015, at his residence. He was born on November 17, 1941, in Harrisburg, IL, to parents Gordon Theodore and Dora (Black) Fisher. Gordon worked for Standard Oil as a dock foreman, and Dora was a homemaker and a prolific crafter. The family moved to Casper when Fred was a toddler, and he attended Casper schools.While attending Natrona County High School, Fred developed his lifelong enthusiasm for athletics as a trainer for the basketball, football, and track teams. He also played the clarinet as a member of the NCHS concert band. Fred eagerly looked forward to his upcoming 55th class reunion this summer.Following high school, Fred enrolled at the University of Wyoming, where he participated in the campus ROTC chapter. He served in the Air Force from 1962-68 as a B52 bomber mechanic. Fred joined the US postal service in Laramie in 1969, rising through the ranks to serve as Postmaster at Hulett, Wyoming from 1979-1992. When he retired, he moved to his dream home outside of Sheridan.Fred was a proud member of the Moose Lodge, American Legion and National Rifle Association.Fred loved the outdoors, and enjoyed a variety of outdoor activities including hunting, fishing, horseback riding, skiing, and exploring Wyoming. He had an uncanny ability to spot wildlife at long distances and an encyclopedic knowledge of Wyoming geography. In his golden years, Fred’s hobbies included cooking recipes from the Frugal gourmet, collecting jokes to share, playing golf, and going for drives all over the state that allowed him to appreciate Wyoming’s incredible natural beauty.Fred was preceded in death by his parents, as well as numerous aunts and uncles in Illinois and Florida. He is survived by his daughter, Marla Renee Fisher, of Alameda, California, and his ex-wives, Glenda Jo Miller of Eaton, Colorado and Kathleen Roberts of Ten Sleep, Wyoming. He will also be missed by a loving community of neighbors and by his friends all over the state.A Celebration of Life will be held at 2:00 on Wednesday, August 12, 2015, at Kane Funeral Home with Pastor Don Derryberry officiating. A reception will follow in the Kane Reception Hall.Memorials to honor Fred may be made to the Sheridan Senior Center at 211 Smith St., Sheridan, WY 82801.Kane Funeral Home has been entrusted with arrangements.