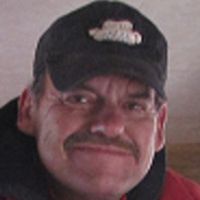 Gale Edward “Ed” Bocek, 55, of Sheridan, went home to his Heavenly Father on Tuesday, January 28, 2014. He was born on September 19, 1958 to Frank and Eva Bocek. He was the youngest of five children. He married Dianne Brown in 2000. They later divorced but remained friends for the rest of his life. They received a German Shepherd puppy from his sister, Dale Ann Miller that they named Nicky and that became their child.Ed grew up on the family ranch at Wyarno, WY and attended elementary school at the Dutch Creek School and later in Sheridan. He started his own painting busines and painted many buildings around the community. He later went to work at Wal Mart until his health prevented him from working.Ed had a great love for making music and enjoyed hunting, fishing, cooking up concoctions, telling old stories, spending time visiting and jamming with his family and friends. He loved camping in the Big Horn Mountains and his heart was bigger than Texas. If he was able to help somebody out he would do that rather than help himself. He loved his family with passion. He had a full and exciting life doing many things that most of us just dream about. He enjoyed talking about his adventures and always did so with a sparkle in his eye when doing so.Ed was preceded in death by his parents, and his older brother, Art Bocek. He is survived by his life partner, Ivy Davis, his sisters, Lee (John) Rompf, Connie (Paul) Perry, and Dale Ann (Dave) Miller all from the Sheridan area and many nieces and nephews.No Service is planned at this time. A memorial gathering will be planned for a later date.Memorials to honor Ed can be made to the Sheridan Homeless Shelter at P.O. Box 6248, Sheridan, WY 82801.Kane Funeral Home has been entrusted with arrangements.

Date:
Start Time:
No Service is planned at this time. A memorial gathering will be planned for a later date.
Location:
Tribute VideoService VideoService Brochure