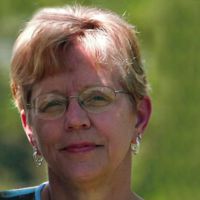 Gary Lynne (DeVault) Gold 70, of Sheridan, passed away on May 21, 2016, at the Westview Health Care Center. She was born on March 28, 1946, in Dover, Ohio to parents James and Marjorie (Jackson) DeVault.They moved to Cambridge Ohio where she graduated from Cambridge High School in 1964. She graduated Suma Cum Laud from Miami of Ohio University in 1968 with a Bachelors  Degree in Elementary Education she was also a member of Delta Zeta Sorority in Miami.She married Larry Gold on June 15, 1968. They had three children; Eric, Amy, and Nicholas (Nick).She  was  preceded in death by  her father James  DeVault  and  her daughter  in  law  Stephanie  (Miller) Gold. She leaves  her mother Marjorie (Jackson) DeVault  –  102  years  of  age; three  children  Eric and wife Andrea; Amy and husband Mark Loeding; and Nick.  She also leaves six  grandchildren  Owen,  Kyleigh,  Cooper,  and  Abbi  Gold  and  Jack  and  Olivia  Loeding.  Additionally she leaves her sister Pam and her husband Andy Hamblin;  niece Jenny, her  husband  Randy,  and  their  children  MacKenna  and  Alyssa  Mittelstaedt;  and  niece  Kimberly and her husband Roy Leszczynski. After college Gary taught school for one year in Cleveland, Ohio where she and  Larry were married.  She then changed careers to follow her dream of being a mother and  home maker.  She was a loving mother and an awesomely, wonderful wife.  After 33  years of following Larry’s career around the world they chose Sheridan as their place to  retire. They moved from Sidney, Ohio to Sheridan in November of 2001. Since moving  to Sheridan Gary has been active as a volunteer for Habit for Humanity; she worked as a  volunteer at Sheridan Memorial Hospital; she served on the Sheridan Memorial Hospital  Foundation  Board;  she  was  a  member  of  First  Presbyterian  Church;  and  she  was  a  member of PEO. Throughout her life Gary and her kind and gentle ways have touched the hearts  and souls of people every where.  She never knew a stranger and always reached out to  help others.  She was loved and respected every where she went. She will be missed by  everyone who knew her.  She will be missed most of all by her children and her husband  of 48 years.  Rest in peace, my darling.A Memorial Service will be held at 10:00 a.m. on Saturday, May 28, 2016, at Kane Funeral Home with Pastor Doug Goodwin officiating with a reception to follow in the Kane Reception Hall.Gary\'s wishes were to have her body donated to research with the hopes of helping to find a cure for Lewy Body and other types of dementia.Memorials to honor Gary can be made to the Sheridan Memorial Hospital Foundation at P.O. Box 391, Sheridan, WY 82801 or to the Lewy Body Alzheimer\'s and Dementia Resource Center at 1506 Lake Highland Dr., Orlando, FL 32803.Kane Funeral Home has been entrusted with arrangements.