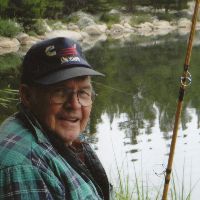 Gene Lester Reimers, 77 of Sheridan Wyoming passed away at Westview Healthcare Center on Sunday, March 15, 2015 with most of the immediate family in attendance. Gene was born 10th of 11 children to Philemon Aaron and Goldie Hilma Victoria (Kardell) Reimers at the farm in Laurel, NE, on August 14, 1937.Gene left school in the 9th grade to help on the family farm when his brothers were off to war or gone. He came west to Wyoming working on several ranches including the Beckton Stock Farm. He moved to Sheridan and worked for numerous garages including Ed Hammers, and Riley Motors. At Riley’s he met Elizabeth (Liz) Rose Jacobs and they married on February 13, 1958. Liz wanted four children and they are Leslie, Clinton, Jerry, and Donald. In order to support his growing family he went to work for Farmers Co-op initially as a shop hand, later delivering farm fuels and at one time carried the title of assistant manager. He retired at 62 1/2, after 39 years of dedicated employment to care for Lizzie.Gene enjoyed his family the most, parents, siblings, children, grandchildren and finally great grandchildren. Work and helping others with projects gave him the greatest satisfaction. His largest passion was fishing. He very much enjoyed camping and hunting. As a farm boy he had a strong connection with the animals and later in life his faith and his participation in the outdoors reassured him of a spiritual presence. Gene led by example, his sense of right and wrong and his dedication to duty will be passed on for generations.Gene is survived by his four children, Leslie Jean Carter (Troy) of Sheridan WY, Clinton John Reimers of Douglas, WY, Jerry Ray Reimers (Rebecca) of Banner, WY, and Donald Jay Reimers (Kimberly) of Jacksonville, FL, grandchildren and great-grandchildren: Nicholas Mancini and children Adrian, Gavin, and Kalista, Jeramie Reimers (Tia) and children Madison, Molly and Matthew, Justin Mancini and son Brant, Jessica Doke (Travis), Melissa Reimers and son Carter, Andrew Reimers and daughter Lexie, Dustin Graham and twin daughters Emmalie and Jenna, Nicole Jahn (Thomas), Kaleb Reimers, Jacob Reimers, Augustus Clay Carter, and Carson Reimers. He is also survived by his sisters: Mary Ann Kahler (John) of Great Falls, MT, Jeanette Hoffman (Gary) of Cody, WY, and his brother George Reimers of Sydney, MT.Gene was preceded in death by his wife, Elizabeth (Lizzy), his parents Philemon (Pop) and Goldie (Mom), his siblings Glen, Guy, Bernard (Phil), Elsie, Edith (Ede), Verlene (Dolly), and Dean.A viewing will be held on Friday evening, March 20th, from 6 to 8 p.m. at Kane Funeral Home, with services Saturday morning at 10:30 a.m. at Kane Funeral Home with Pastor Bill Dill officiating, burial will be at the Sheridan Municipal Cemetery. A Reception will be held at the Knights of Columbus building at 301 E. Brundage following the services. Memorials to honor Gene can be made to the Shriner’s Crippled Children\'s Fund at PO Box K, Sheridan, WY 82801, or the Ronald McDonald House Charities, of Denver Inc. at 1300 East 21st Ave., Denver, CO, 80205.Kane Funeral Home has been entrusted with arrangements.