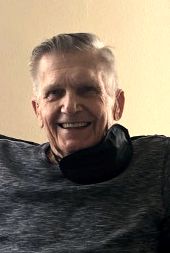 George Albert Smith (84) died March 8, 2022 in Sheridan, Wyoming after a lengthy illness. He was born on February 26, 1938 in Sheridan, Wyoming. He was raised on the family farm, Murphy’s Gulch , along with his four brothers. Gillette would become his home. George Albert served in the Army as a military police in Germany. He had a successful career in the oilfields of Wyoming and North Dakota.  George had a passion for collecting antiques and collectibles.  He will be remembered in Gillette with his furniture restoring business, By George Exclusive!  He enjoyed gardening with his wife, Bette. The family spent many gatherings on his front porch. George is preceded in death by his wife, Bette Faye Holcomb Smith.  He is survived by a son, Greg Smith, and daughters Debi Howitt (Ted) and Cindy Parker (Bruce),  he had 6 grandchildren, Cara, Ryan(Sarah), Stephanie (Eric), Taylor (Adam), Carson, and Sloane. He had 8 great grandchildren, and 5 great great grandchildren.  He is survived by two brothers David(Kristy) and Gary(Lou)George was a son of Wyoming A celebration of life will be held at a later date.