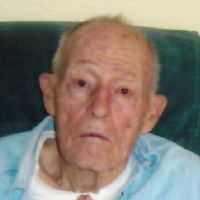 George Gosch, 95, passed away peacefully at our home on March 15th, 2014. He was born to Christian and Anna Gosch in 1918 in Rock Island, Illinois. As a young boy, he and the family moved from Rock Island to Great Falls, Montana in a covered wagon. Their trip followed the Lincoln Highway, then north through Yellowstone Park. The stay in Great Falls did not last long and the journey back to Illinois took them through Sheridan, Wyoming where an unscheduled stop lasted 40 years.George was drafted in August 1941 and served in the U.S. Army 5th Armored Division, landing him a front row seat for the fight and fall of Germany. George married Mary Emma Elkins in January 1942 and had four sons during the course of their marriage. Life was good after World War II until the National Guard got him a ticket to Korea.After Korea George resumed work with the U.S. Postal Service where he worked in the Sheridan post office. Then later he transferred to the Railway Postal Office between Sheridan and Alliance NE; another transfer took him to the RPO between Kingman, Az. and Albuquerque, NM. He completed his career with the post office in Kingman after 36 years of service.George and the family moved to Kingman, Az. in 1965. Mary, his wife, passed away in 1990 and he remained in Kingman until 1995. He then moved to Flagstaff, AZ to be closer to family and remained here until his passing.George was preceded in death by his beloved wife Mary, infant son, George Jr, parents and 3 sisters. He is survived by sons Ralph(Linda), Buena Vista, CO, Carl (Gail), Blythe, CA and Tom (Melanie), Flagstaff, Az. seven grandchildren and 15 great-grandchildren, two brothers and one sister.Services will be held at Kane Funeral Home in Sheridan, Wyoming on Friday, March 21st at 10 am.Kane Funeral Home has been entrusted with the arrangements.