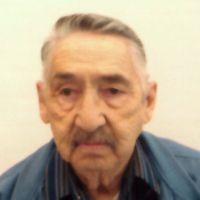 George L. Riddle Sr., 86, of Sheridan, passed away June, 19, 2013, after a long battle with cancer.George was born June 6, 1926, in Yorkton, Saskatchewan, Canada, the son of Albert Roland Riddle and Rosine Peltier. He was an enrolled member of the Turtle Mountain Band of Chippewa Indians of Belcourt, N.D. He enlisted in the U.S. Army and served in the Burma, India Campaign during World War II. He was Honorably discharged in 1945. He joined the Wyoming Army National Guard after his discharge.In 1946 he married Josie Hernandez and was later divorced. For years he worked as a cement finisher on many projects through out Wyoming, before becoming a full time member of the Army National Guard. Ending his career as a Staff Sargent. In 1970, he met Marjorie Wheeler and the two were married in 1976. He retired in 1982.His passion when young, was fishing, hunting and camping. He enjoyed spending time with his brothers and sisters. He especially loved spending time with his little brother Richard. He lived life his way, and did not like change.He was preceded in death by his father Albert, mother Rosine and step-father Jimmy Trevino; brothers, Alex, Harry and Richard; sisters, Mary Jane and Margaret. George is survived by his wife Marjorie; daughter Margaret Johnson; sons George L. (Miki) Riddle Jr., and Albert R. (Jackie) Riddle; step-sons Kenny (Marcia) Fann and John (Jackie) Fann; his beloved grandchildren Candida, Brandon, Vanessa, Tony, Dale, Danny, Mike, Stephanie, Joyce, George III, Ruben, Cortnee, Strider, David, Travis, Patrick and Russell; and eleven great-grandchildren.At his request, there will be no visitation or memorial services held. Cremation has taken place and a private family burial will be held at Bull Creek Cemetery, on the South Fork above Cody, at a later date.In lieu of flowers, memorials may be sent to Hospice of the Big Horns, P.O. Box 391, Sheridan WY 82801.Kane Funeral Home has been entrusted with arrangements.

Date:
Start Time:
At his request, there will be no visitation or memorial services held.
Location:
Tribute VideoService VideoService Brochure