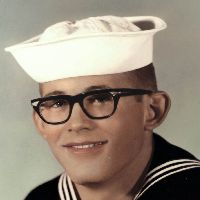 George David “Skip” Lenz was born on June 18, 1946, to Natalie and Fred Lenz. Skip began his life on a naval base in San Francisco, California, where his father served in the United States Navy. When he was only six months old, the captain of his father’s shipped dubbed him “Little Skipper.” With that prophetic call, Skip’s name and vocation were cemented forever. His father completed his naval career in late 1946, at which time he moved his family to Sheridan, Wyoming, where Skip would spend the remainder of his life. On January 27, 1966, Skip fulfilled the calling of his infancy and entered service in the United States Navy. He served onboard the battleship U.S.S. New Jersey, which was at the time the world’s only active battleship. En route to Vietnam, Skip developed a reputation onboard for his world-famous cinnamon rolls, which, alongside his charming personality and relentless sense of humor even in the grimmest of situations, earned him many admirers on the ship. After serving for three years in the Vietnam War, Skip completed his naval service on November 4, 1969.Once he returned to American soil, Skip set sail for Wyoming. Back in Sheridan, he served for several years as an active member of the police force before settling into his lifelong venture as a local entrepreneur. Skip owned several businesses in town, selling everything from seafood to candy to automobiles. It was during this season of his life that Skip met the woman who would become the love of his life—Judy (Lomax) Lenz. Skip and Judy married on August 9, 1990, making their home in Sheridan. Along with their basset hound, Rufus, Skip and Judy opened Skip’s Auto Emporium in 1996, which they ran until their retirement in 2015. When they were not working, Skip and Judy spent their time camping, fishing, and enjoying the beauty of God’s creation in the Big Horn Mountains. Though they shared a mutual affection for antiquing, camping, and their grandchildren, no love in their lives matched that which they shared with one another. To be in the presence of Skip and Judy was to witness the essence of selfless love that would last a lifetime.The Latin expression, nomen est omen, literally means “the name speaks for itself.” Skip, given the name of a leader in his infancy, was a dedicated servant to his country and community. Still, the most profound example of Skip’s life of service is in his remarkable leadership of his family. A unique combination of strength, humor, and compassion, Skip’s impact on his loved ones was of lasting value. He is survived by his beloved bride, Judy; two step-children in Tennessee, Jason (Amber) and Shelley; two granddaughters, Hayley (Kenton), of Hopkinsville, KY, and Bree (Charles), of Phoenix, Arizona; a grandson, Cohen, of Clarksville, TN; and one great-granddaughter, Nora. In the hearts of these beloved individuals and countless others, Skip’s legacy of compassion, generosity, and lavish love will continue for many generations to come. Many volumes could not contain the countless ways Skip’s life attests to his role as a leader among men. Suffice it to say, for Skip, well, the name speaks for itself.In lieu of flowers Memorials to honor Skip can be made to the Hub, “Senior Center”, 211 Smith Street, Sheridan, WY, 82801 or to the Donor\'s Choice. A Celebration of Life will be held from 2:00 – 6:00 p.m. on Friday, June 22, 2018, at the Big Horn Mountain Eagles, 1760 Commercial Ave., Sheridan, WY.Kane Funeral Home has been entrusted with arrangements.