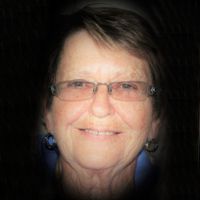 Gertrude “Gertie” Anne Ault, 76 passed away on July 30, 2018 under hospice care at The Legacy in Gillette, WY. A “Celebration of Life” service will be held Saturday August 4, 2018 at 10:00am at St. Matthews Catholic Church, Gillette WY to be followed by a Luncheon at the church. Please join us in laughter and tears as we talk about how she lived and touched our lives. A burial of cremains will be held at a later time for family at the Mount Pisgah cemetery. Gertie O’Hearn was born on March 28th, 1942. Her parents, John “Joe” and Doris O’Hearn were living on the family farm near Spencer, IA when Gertie was born. Her love for the outdoors and gardening began there on the farm. Gertie graduated from Spencer high school and later graduated from Mercy School of Nursing in Des Moines, IA in 1963. Gertie often shared stories about her nursing school years and the lifelong friendships she made there. Gertie and Vernon Ault were married January 19th, 1963 and they were not only husband and wife but best friends. They had six children: Dave, Mary, Dan, Don, Susie, and Rich. Her children and their families were the most important part of her life. Gertie enjoyed hosting family events, and everyone was always welcome. She loved spending time with her children, grandchildren, great-grandchildren and friends. Being of service to others was the way she lived her life and was a great example to follow. She worked in nursing and it was a career she loved and took much pride in. She retired in 2008 after 45 years working as an RN, Director of Nursing and worked in Home Health Care. Some of the places she worked at were Mercy Hospital in Des Moines IA, Woodward State Hospital in Woodward IA, St Luke Lutheran home in Spencer IA, and her last place of employment was Pioneer Manor Nursing Home in Gillette WY where she was blessed to have worked for 21 years and it became her second family. Gertie is survived by her children Dave (Tammy) Ault, Mary (Jack) Sindelar, Dan (Julie) Ault, Don (Diane) Ault, Susie Deranick, Rich (Steph) Ault, 13 grandchildren, 10 great-grandchildren, and brother Jim O’Hearn. She is proceeded in death by both parents, brother Mike, son in law Mike Deranick and husband Vern. The family requests in lieu of flowers, condolences and memorials be made in Gertie’s name. They may be sent to 5311 Friday Street Gillette WY 82718.Kane Funeral Home has been entrusted with arrangements.