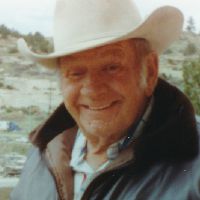 ‍On December 19, 2016, our beloved father, grandfather, uncle, brother and friend went to be with the love of his life. Gilbert Alger Powers born May 8, 1928 in the Grandad Cossitt house at Quietus, Montana to Jennie Atkinson Powers and Phineas Wesley Powers (Phin) of Bear Creek. Gil was the last of the children born to Jennie and Phin. Siblings include Robert, Philip, Jeannette, Eleanor and Natalie. Eleanor L. Avery is the only surviving sibling and she resides in Seattle, Washington.Gil grew up on the Bear Creek homestead where he and the Cossitt boys (Austin, Brick, Bill and Jim) were close friends. Robert and his mother lived on the family ranch and Gil and his new bride Eva Jean Reed who married on January 2nd, 1952 lived close by and continued to work in conjunction with Robert (Uncle Bob) for many years. Gil worked on numerous ranches in the area, including helping drive cattle to Kendrick Railhead when he was as young as 14 years old and many times after that. He maintained good relations with his neighbors and was well liked by all.Gil worked tying wool for sheep shearing crews in the area starting at the age of 15, and told many stories of those experiences. He loved to socialize and tell stories, and especially loved it when he was the center of attention.Gil was self-taught on the mouth harp at an early age, as well as the guitar. He played with numerous bands in the area including the Otter Creek Boys and also with Chuck Craft, Danny Craft and August Decker playing for dances at Sayle Hall, Birney, Decker and Moorhead dance halls. Once, possibly for a New Year dance at Moorhead dance hall, Chuck and Danny were supposed to meet Gil to play, and Chuck and Danny weren\'t able to make it and Gil played by himself with the mouth harp and guitar and didn’t repeat any of the songs throughout the entire night. Another highlight of his musical career was winning a talent show when he was in the military in Hawaii.A highlight of going to the Kendrick Railhead, Gil told of Levi Howes getting him and Dee Avery a ticket on the passenger train to Omaha where the cattle were sold (instead of riding the cattle train in the caboose) and Mr. Howes gave him one dollar to spend on the trip.Gil carried the U.S. Mail horseback in the 40’s, which was a 40 mile route from Quietus loop back to Quietus and later when he was in his 70’s and early 80’s carrying mail for many years which was close to 100 miles round trip from Otter, Mt.Gil served a stint in the army in 1951 and was stationed in Hawaii. He got sick with pneumonia and so his service was cut short. He didn’t like Hawaii he said the temperature never varied – it was always 70 degrees.Gil and Jean had four children; Thomas Wesley, Christina Deanne, Gilbert Wayne and Marion Ilene. He is survived by children: Thomas Powers (LeeAnn), Christina Schmid (David-deceased), Marion Powers, grandchildren: Thomas Schmid, Joe Schmid (Kitty), Jennifer Powers, Jessica Powers, Kelly Powers, Nate Powers, Ben White, Andy Todd, Katie Todd, Trevor Todd, Eva Swiss. Great Grandchildren: Dawson Bell, Tannah Moe, Ashley, Cole and Jennie Schmid, Joe and Shannon McHenry, Phillip Clemens, Brenin Peterman, Wyatt and Riley Powers, Jacob Todd and Luke Todd.A Visitation will be held from 11:00 to 2:00 with services to follow at 2:00, on Wednesday, December 28th, 2017, at Kane Funeral Home with Reverend Kevin Jones officiating. Interment will be in the Elks Memorial Cemetery with Military Honors. A Reception will follow at the Elks Lodge 520.Memorials to honor Gilbert can be made to Elks Lodge 520, 45 W. Brundage, Sheridan, WY, 82801.Kane Funeral Home has been entrusted with arrangements.